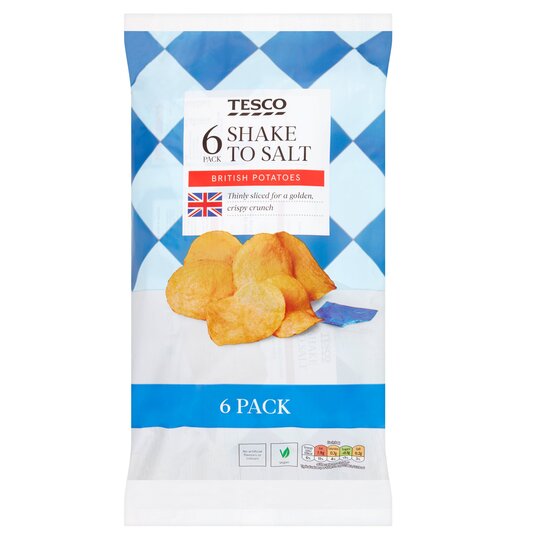 I used to like these as they were on par with branded ones. The last couple of packs have tasted weird. Not off or out of date , just overcooked and the oil on them tastes odd, like watery wd40. I am going back to branded ones.

Absolutely awful. They taste stale and most of them they have black bits covering nearly the whole crisp. Bought 2 packs and unfortunately they had to go straight in the bin. What a waste.

Better than the competition

I don't eat crisps. My partner loves them but they aren't allowed to eat salt. We used to get the Walkers Salt & Shake crisps but as these were so much cheaper I thought I'd get them for my partner to try. In a blind tasting he said that he definitely preferred these as they are more 'potatoish'. We only get these now. Unless Tesco runs out...

have had these before but recently found the crisps to be too hard.had visions of breaking my teeth. Had a packet of 6 but after trying two packets at different times, I threw the rest away.

Nice but a bit of a lucky dip

Nice crisps but opening a packet is a lucky dip. I have found hard crisps in one and in another no salt sachet. Will keep lucky dipping though as they are nice enough without the salt.

I bought these to try as I usually buy the well known make ....well these are delish ...fresh ,crunchy ,golden crisps. I think other reviewers must have had faulty packs. I like them very much and will switch to these. Half the price of the other brand, and you can adjust salt and they taste fresher ! Great crisps !!!!

Usually have Walkers but these are cheaper and jus

Usually have Walkers but these are cheaper and just as tasty.

Better than walkers in taste and value

Better than walkers in taste and value

I purchased 2x6 packs of these crisps on my delive

I purchased 2x6 packs of these crisps on my delivery order. We used them over 2 weeks & every single bag, contained only small pieces, not one normal size this was not due to being damaged in transit as the outer bags were perfect & not crushed at all. Very poor. Mrs J Ingman

Been very hard recently and some crisps have black

Been very hard recently and some crisps have black edges. Not as good as they were.