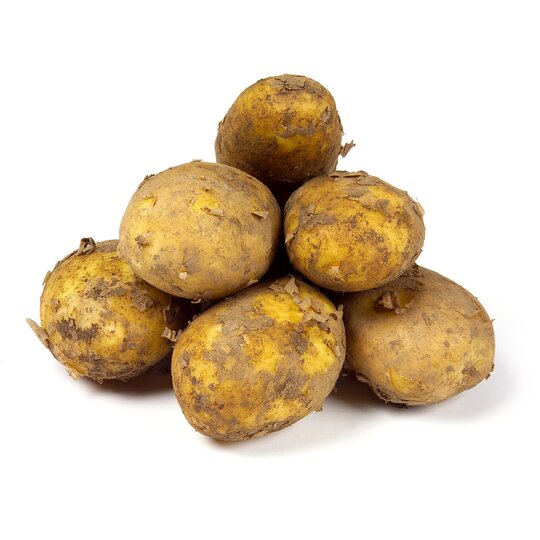 Threw them away, green and some of them where soft

Threw them away, green and some of them where soft. Don’t bother buying online disgraceful they where even sent. I will only buy them if I can see them in store

Well, spuds are spuds, but beware!!! Mine arrived loose in a paper bag, so I stuffed them in a cupboard. No light. But 4 days later, they were green-ish. But the BIGGEST disappointment is the size. It often is, I'm told. Looking at the photo, they seem to be the same size as the baking potatos on the same page, but they certainly aren't. The baking spuds are large items, sometimes the size of a baked bean can, but the new potatoes - seemingly the same size in the photo - are about the size of an egg. So if you order new potatoes by number instead of weight, you might be in for a shock. I buy fortnightly, so I ordered 6 new potatoes. I got 6, of course, but instead of three meals for us, we ended up with one portion! Lesson learned.

Most of those delivered are green

All the potatoes were tinged with green, quite a few were far too green to even think about eating. The last three orders have been the same, I shouldn't have persisted. Obviously badly stored.

These potatoes were not fit to be sold & I can't understand how Tesco thought otherwise. They were green & rubbery (some were shrivelled) & they had to be thrown out. As were the ones which were delivered the week before - I stupidly thought my next weeks' order had to be an improvement! Complete waste of money & could do without this hassle in the current situation when self isolating.

Bought four to find two were green so inedible

Not what I was expecting, very small look like ba

Old in appearance, lots of green in them - not goo

Old in appearance, lots of green in them - not good at all.

Could have been a bit smaller

Despite some poor reviews which I tend to ignore anyhow I ordered 0.75kg and received 0.83 so cannot complain about that. First impression was that the potatoes were a bit on the large side. New potatoes should be not much larger than a golf ball for best taste.However they scraped well and were good to eat

Expensive for their size, not one of the 9 I ordered were as big as a chicken egg, disappointed.