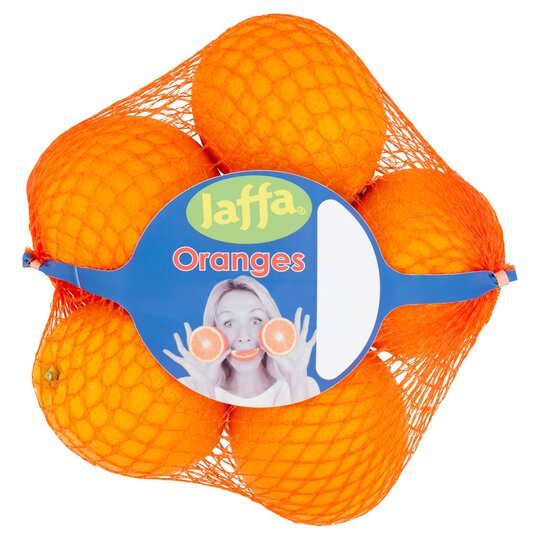 Great oranges, very tasty and very juicy. Can vary in taste from batch to batch but are generally great.

they look nice on the outside (probably the wax or

they look nice on the outside (probably the wax or conservatives) but are quasi tasteless.

Tastes nothing like a jaffa cake. I can't recommend if that's what you're looking for. Very disappointing, hurt. As oranges go though, they were nice.

Too difficult to peel, full of pith, tasteless.

Got two packs of these oranges least night. They are the worst I have ever had from Tesco. Very difficult to peel, full of pith and so chewy you cannot actually chew them enough to swallow them. Each segment is a battle so after trying two of them gave up. They are quite tasteless and even with the two packs there would not be enough juice to make it worthwhile squeezing them. Will not buy oranges again - any oranges!

Difficult to peel and pithy and no taste.

Difficult to peel and pithy and no taste.

VERY DRY AND HARD TO PEEL

THESE ARE THE WORST ORANGES I HAVE HAD AS A SUBSTITUTE. EXTREMELY HARD TO PEEL AND CHEWY. HAD ORDERED SINGLE ORANGES AS THEY ARE BIGGER AND BETTER QUALITY EVERY TIME I ORDER.

WORST ORANGES EVER !! They were not like any Jaffa oranges I have had before either in looks or taste. I bought them as usual with Jaffa mandarins as an offer-these too were WORST Mandarins EVER !! They were inedible & will have to be thrown away! Tesco has changed,& not for the better... I shall be looking elsewhere!!

Bought these last week, bought two packs to get the offer but was very disappointed, not sure if season is finished for oranges as they have been lovely for months but these ones were dry and not nice tasting. Only gave three stars because up until now they have been lovely, maybe worth trying some more but dont want to waste my money, gutted as I have an orange when my husband has a magnum, might succum to the magnums now :(

Always buy Jaffa as they are good value, sweet, seedless and easy to peel. The last two packs I bought had very thick skins, lots of pith between the segments and were full of seeds. Wasted so much juice trying to get the skin and pith off. However the peel is great to zest so used them baking fig & orange scones. Hope that was just a bad batch I picked.