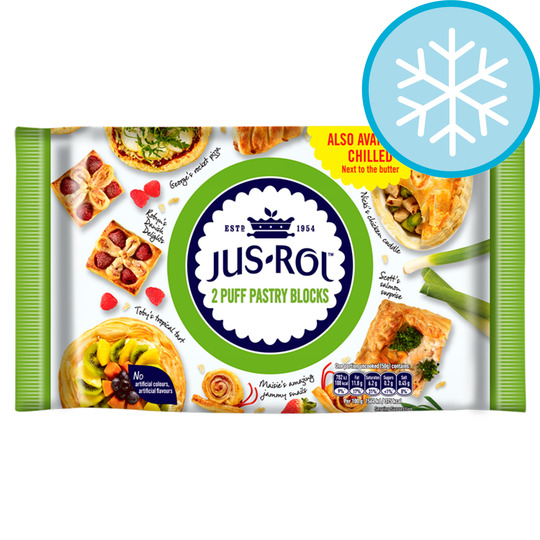 17%of the reference intake
Saturates
6.2
g

of the reference intake*
Typical values per 100g: Energy 1564kJ

Keep frozen at -18°C. Do not refreeze once defrosted. Once defrosted use within 24 hours.

Horrendous claggy, oily consistency to what it used to be. Can never part the two blocks which are frozen together. No puff or layers for sausage rolls, Used to be the best but sadly now awful. Don't know who would buy this now, horrible taste & texture.

Thought I’d try my luck, but as other reviewers have said, the 2 blocks were completely frozen together. Impossible to separate and use just one without thawing the whole lot.

The two blocks were frozen together so difficult to separate. The quality was terrible, no rise, absolutely awful, wouldn't recommend or buy again although I have used Jus-Rol before with success so don't know what's gone wrong.

Not a great puff up!

I found it perfectly fine to separate once completely thawed! However it didnt rise as much as I thought it would but it was fine to make things like eccles cakes with. I'd go for the ready rolled if I wanted a good puff on a pie, that has always worked better for me in the past.

Says two blocks but impossible to separate frozen or thawed, so did some extra baking. Once thawed, it seemed very wet which rang alarm bells. The pastry didn't rise at all, let alone 'puff' and was hard and unpalatable. I thought I could trust a name like Jus-Rol but it ruined the pies and I won't be buying this product again.

Two blocks frozen together as one

The two blocks were frozen together and could not be separated without thawing so one block was wasted. I used to like Jus Rol pastry but this did not puff up when cooked and the pastry was hard and tasteless. Won’t be buying again.

Impossible to separate the 2 blocks

Have to agree with other reviews, impossible to separate when it is frozen and even if you thaw it the 2 block are stuck together and cannot separate. Also there is not much actual puff to it.

Doesn't do what it says and isn't worth the effort

Hate is too strong a word but above the previously mentioned challenge of trying to seperate the two blocks that are frozen solid together (a sturdy knife and a cast iron frying pan to use as a hammer does it for me [health and safety not a strong point in my kitchen]), once defrosted the item smells rank. Ignoring this, roling out and making whatever you desire, put it in the oven and you will find the baked item will be barely puffed with little flakeiness to it.The last batched came out with texture and eatability of pale leather. I won't buy this again and I am frustrated with the lack of alternative products, available at Tesco, especially all butter quality pastry. Even Tesco have discontinued their large (non butter) ready rolled (which in itself was interesting to work with. But that's another story). In short this product isn't worth the effort and doesn't do what it says on the label.

The two blocks are almost impossible to separate. I had resigned myself to having to discard the second block, but eventually managed by pouring boiling water on the blade of a very big chopping knife and repeatedly inserting it between the blocks till I prised them apart. It took a lot of effort and was a bit risky as the pastry slipped around a lot. There really has to be a bit of greaseproof paper separating the blocks, or instructions for a safe way to separate them.

practically it is one big block

sadly the two blocks were ice frozen together and difficult to part.