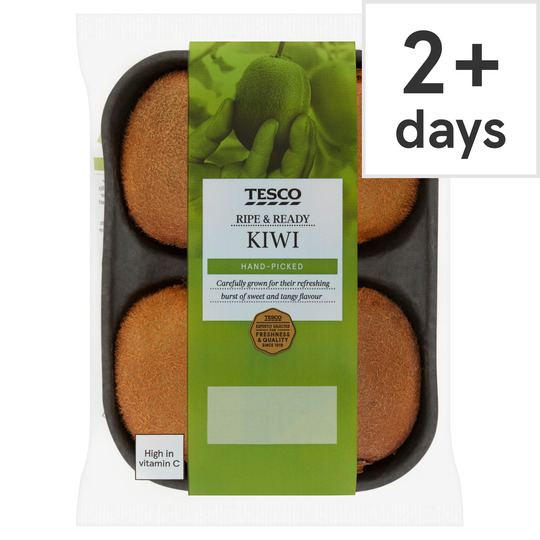 of the reference intake*
Typical values per 100g: Energy 209kJ

firm when arrived put 2 in fruit bowl and 2 in a small bowl with a banana they were ready to eat next day . Bananas will ripen any fruit

Wash before eating??? Do not think so as you remove the skin.

Could hammer nails in with them

I will keep on ordering these , but ripe and ready

I will keep on ordering these , but ripe and ready they are not . i have had to wait at least a week for them to be so .

Bought for decorating a cheese cake I could not use them as they are rock hard and sour, a week later and still not ripe, awful.

Rock hard kiwis even after the best before date has been passed. Inedible really as the core was like chewing wood. You can't eat them by cutting the top off and using a spoon. Do not buy.

2 out of 4 were inedible and had to be thrown

2 out of 4 were inedible and had to be thrown

Not ready to eat! But after a week - one was.

Not ready to eat! But after a week - one was.

NOT ripe and ready

These are SO not "ripe and ready". They are hard and will probably rot before they are soft and ready.

Hard and not ripe and ready

These are supposed to be Ripe & Ready to eat Kiwi fruits but the ones that were delivered last Friday were not ripe - the flesh was still hard and the cores were so hard that we couldn't chew them even when the flesh had been sliced into fairly thin slices!