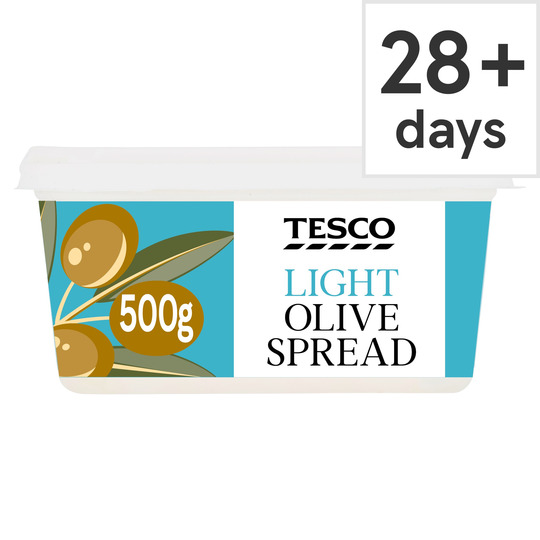 Great alternative to dairy spread, I really don’t get what everyone is moaning about. I put this on the top shelf of fridge and it’s absolutely ok, lasts around a week in our house. It’s quite bland but does the job!

Shame it contains palm oil. Sort it out Tesco!

Shame it contains palm oil. Sort it out Tesco!

Revolting. Chose this because I thought it would be a relatively healthy option. However, only a few days, it has split into a strange half-liquid, half-gunky consistency. I've put 'normal' margarine onto my next delivery order, and once it arrives, the olive oil spread will be going straight in the bin.

We have aways found this to be nice. I've never had issue with it going runny but I don't leave things like this out, it is used and returned to a cold fridge so it has always been fine.

I am diabetic, so it seems to work. Thanks Tesco

this was fine when first opened. However despite having been kept refrigerated and kept in coldest part of fridge, on going to use it the following week it had separated, curdled, and assumed the consistency and appearance of very runny custard. In fact, far from being of a spreadable consistency, it was 'pourable'! It looks revolting, I would not recommend it - and I shall certainly NOT be buying it again!

I got it out of the fridge to make some sandwiches and it was watery and as though it had been left out all night on the bench, very runny and appeared grainy. Not buy this again.

It disintegrated and was unusable even kept in fri

It disintegrated and was unusable even kept in fridge

It could have been good.

I was really excited to try this, however if it is left out of the fridge, it melts into a gloop, and doesnt re-set again.. Really offputting.