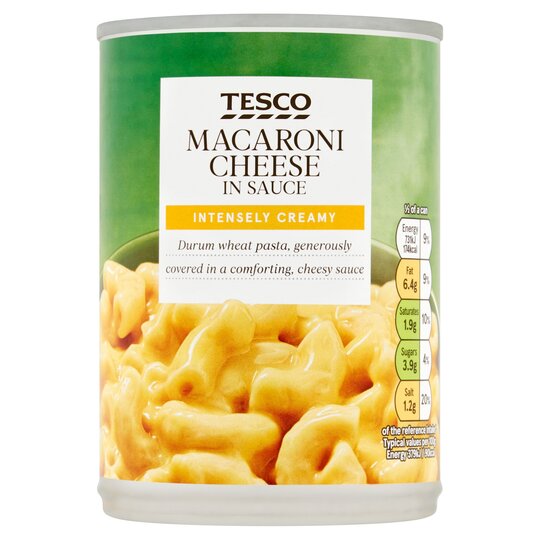 Store in a cool, dry place. Once opened transfer unused contents into a non-metallic container, cover and refrigerate. Consume within 2 days.

Hob
Instructions: Empty the contents into a saucepan.
Heat gently for 4 minutes, stirring frequently.
Do not allow to boil.
Time: 4 mins

I thought this was really nice, I’m glad I tried it regardless of the negative comments, at such a good price it was worth taking a chance to check it out for myself, I will be stocking up on these in case the price rises or stock gets low because it is creamy and enjoyable and I add my own salt to taste ;)

l really enjoyed it, and it’s great for the price - I added a sprinkle of cheese and I think that helped a lot!

I like the flavour. The flavour is different to Heinz macaroni cheese but not inferior to it. It makes a pleasant meal with some wholemeal bread.

Think they forgot to put cheese in my can, virtually tasteless, avoid

Horribly sweet and a stranger to cheese

I can generally find something to like about most foods, and I realise tinned versions are never going to be the same as fresh or frozen. That's okay, because they're usually tasty in their own right. For example, I don't expect spaghetti hoops to be like pasta cooked from scratch, because their place is on hot buttered toast, where they're perfect and "proper" spaghetti wouldn't be. I used to feel the same about tinned macaroni cheese, but this is absolutely vile. It's actually sweet, not just lacking in cheese flavour. The last time I tasted anything like this was a vegan cheese sauce mix, but at least that had the excuse of not being allowed any actual cheese in it. The cheese content in this appears to be mostly soft cheese, and there's more sugar and mustard in it than cheese powder, which is a long way down the ingredients list. Out of morbid curiosity, I checked the ingredients for what I'll call the brand leader. Reviewers seem to hate that as well, but it does have Cheddar cheese near the top of the list and sugar near the bottom. I'm not an anti-sugar zealot, and sugar (not sweetener, please) improves lots of savoury recipes. I just don't want sweetness to be the dominant flavour. I want macaroni cheese to taste of a hard cheese, even if the flavour's come out of a test tube. This is an awful recipe, and cheapness isn't an excuse for it.

The most disgusting thing I've ever tasted!

Avoid at all costs

Just awful, nothing more to say.

Awful Such a horrible taste total waste of money.

This is probably one of the worst things I've eaten in 2020. I have very low food standards (I will eat most things without fuss) and I'm happy just eating plain pasta with grated cheese, but my parents gave me a tin of this so thought I'd give it a go instead of wasting it. First thought on opening the tin was that the factory had made a mistake and used custard instead of the cheese sauce. It looked exactly like tinned custard. Then I cooked it, and it tasted awful. The sauce had absolutely zero flavour. Well it had a sort of saltiness to it, but no cheese flavour, I wouldn't have been able to identify what sauce it was if I hadn't have seen the tin myself. The macaroni was terrible as well, it was like a soft mush that I wouldn't classify as being pasta. Had two mouthfuls and couldn't stomach any more. I hate throwing out food but had no choice with this. I find it hard to believe anyone would actually have eaten this when they were coming up with the recipe and decided it was good enough to sell!