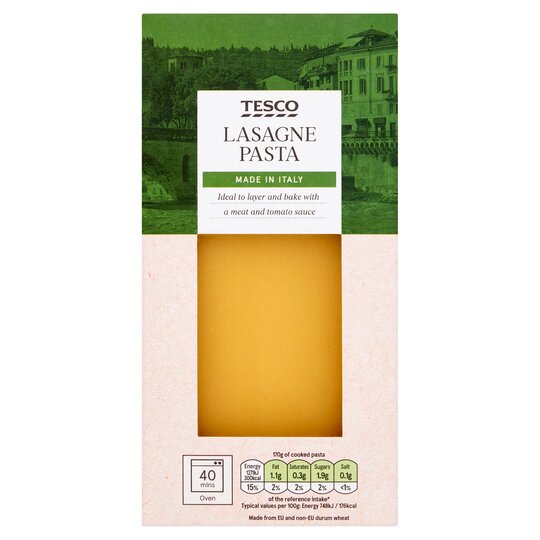 Per 170g of cooked pasta

Store in a cool, dry place and once opened place in an airtight container.

Instructions: Temperature: 180°C, Fan 160°C, Gas 4
Time: 35-40 mins
For best results, oven cook. It is not necessary to pre-cook lasagne pasta. Oven 180C/Fan 160C/Gas Mark 4. 35-40 mins Pre-heat oven. In a greased ovenproof dish place a thin layer of your choice of sauce and then arrange a layer of lasagne strips on top. Alternate layers of the sauce and lasagne strips covering the last layer with a white sauce. Sprinkle with cheese and place in the oven for 35-40 minutes until brown.

Hob
Instructions: However if you prefer to pre-cook the lasagne sheets use the following method: Add the pasta to a large pan of boiling water, stir and return to the boil.
Cook for 10 minutes, drain well and serve immediately.
Time: 10 mins

Great quality. Get 2 to 3 meals from this size pack. Good value

I didn't find anything wrong with these pasta sheets.i just made sure there was enough sauce/meat mixture to soften the pasta then there wasn't a problem. I do like a generous meat layer in my lasagne then I assembe it and leave for a while before cooking and if there is enough sauce/cheese on the top the pasta doesn't curl up. I never precook the lasagne sheets.

Would give 0 stars if I could. It used to be good,

Would give 0 stars if I could. It used to be good, but now splits into shreds when pre-cooking. Had to throw it away. I thought I'd try another packet a few weeks later and the same happened. All in the bin now.

Keep the cheese for another brand

The first time I tried it, I followed my instinct and boiled the pasta. It turned out very soft and stuck together. This time I decided to try the other method by oven cooking it. The instructions say it is NOT necessary to pre-cook it but trust me if you follow that guideline you would RUIN your lasagne. I cooked it for over 50 mins and checked intermittently to see if the lasagne noodles had loosened up. The edges turn rock hard and charred and still would not budge. Please improve your recipe or where you source the noodles from!

I wouldn’t have given it any stars if that was possible. Hard, thick and chewy. Like other reviewers I cooked for longer than instructions stated but still tasted awful and ruined the lasagne I cooked. Rubbish, do not buy.

Lasagne Pasta used to be good but they’ve changed supplier to Veneto and now it splits when boiled for just a minute or so. You need to boil otherwise it’s too chewy. Will be looking for an alternative next time.

Way too chewy and the pasta is thick and hard so I went 15 minutes over to try to soften it up. Will attempt lasagne with these again as I will precook first as the bits that were soft(ish) were tasty. If it still comes out chewy then the remainder of the box is going into soup instead.

as i'm diabetic i need to know the carbohydrate va

as i'm diabetic i need to know the carbohydrate values per 100g dry weight for lasagne. we spent way too much time trying, and came to the conclusion that it was impossible.pity its the only lasagne pasta available, and judging from the other reviews it's far from good. I'm going to have to throw it away!