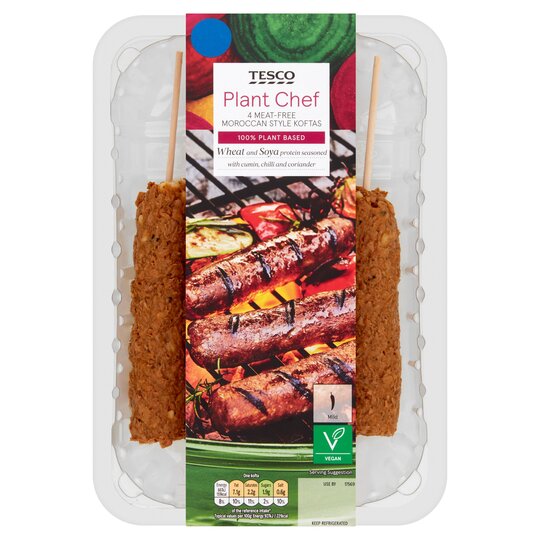 10%of the reference intake
Saturates
2.2g

11%of the reference intake
Sugars
1.9g

2%of the reference intake
Salt
0.6g

10%of the reference intake

Suitable for home freezing. Ideally freeze as soon as possible after purchase but always by 'use by' date shown. Not suitable for cooking from frozen. Defrost thoroughly for a minimum of 12 hours in the fridge. Once defrosted use on the same day and do not refreeze. Follow the preparation guidelines above. Keep refrigerated. Once opened, consume within 1 days and by 'use by' date shown.

Instructions: 200°C/Fan 180°C/Gas 6 15 mins Place on a non-stick baking tray in the centre of a pre-heated oven, turn halfway through cooking.

Barbeque
Instructions: For a chargrilled barbecue effect cook as per guidelines above, then place on the barbecue for a further 5 minutes, turning frequently.

Not bad if be you try this trick.

As other reviewers have commented these koftas have a big problem with the raw texture. I too found that they had melded into one soggy mass that stuck to the packet. They were impossible to lift out on a stick as the sticks just came out of the goo. However......I came up with a technique that overtones the problem. Make sure they are laid out fairly flat in the packet. Remove the top film. Ignore the "not suitable for microwave" instruction and put the whole darn thing, tray included in the microwave for about two minutes. The tray will warp but they will have firmed up enough to separate with a knife and pick up with the stick.Then just grill them to finish. Not a bad flavour and texture for a meat substitute,pleasantly spiced and nice enough that I would buy again,especially now I know how to overcome by the problems.

One solid mass and the sticks fall out.

These were disappointing. The four koftas had stuck together into one solid lump, that had also stuck to the plastic container. Impossible to separate without cutting the block with a knife. When trying to lift them from the plastic container the sticks break free of the soft body of the kofta and you are left with a stick and the kofta is still stuck to the packaging. They taste OK, but not spectacular.

Absolutely delicious, but a shame, as with a lot o

Absolutely delicious, but a shame, as with a lot of vegan food they contain Palm Oil

Brown matter on a stick

It looks like something bad on a stick. They taste bitter and like a carton board. There is no taste of coriander or other spices included. They smell like an old sausage roll. It isn’t similar to meat in any sense, neither colour nor texture is close to anything produced by an animal. I seriously don’t recommend it to any meat eaters or vegans alike. Both vegetables and meat are better than it.

We try a lot of veggie and vegan alternatives and have found Plant Chef very hit and miss. This one was sadly a huge miss. The texture is strange (but does firm up on cooking) and it wasn’t very tasty. My husband - who usually eats anything - didn’t finish his.