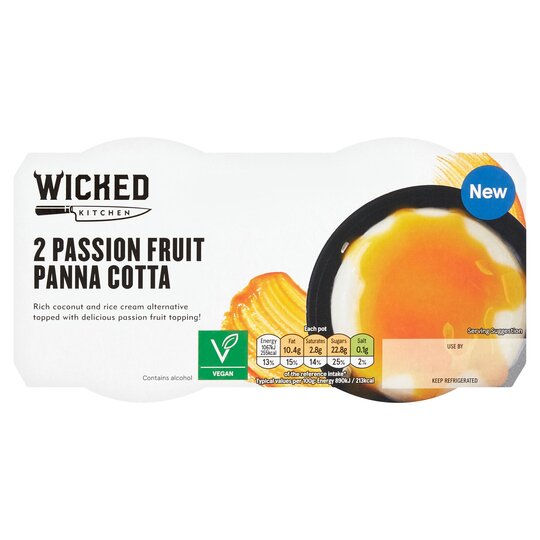 View all Free From & Vegan Desserts

The coulis packs a punch but is hella sour on it's own. The "panna cotta" part is terrible, just slop and it should be called something else.

The panna cotta was runny and gritty. The sauce tasted nasty. The whole thing was much too sweet. Saying this is ' not nice' is putting it mildly.

Has been offered as substitution and I will never accept it again!

Okay but not a panna cotta.

Firstly, this is not a panna cotta and should never be likened to one. It’s coconut and rice solids set with carrageenan. It tastes okay but it’s not a panna cotta taste and the texture is nothing like a proper panna cotta. The passion fruit sauce is lovely and exceptionally tart. As a low calorie dessert it’s refreshing and quite nice/tasty. Would I buy it again? Not sure.

No instructions as to how to prepare it. I thought

No instructions as to how to prepare it. I thought all panna cotta needed to be oven baked. Should never be named panna cotta as there is nothing panna cotta about it. Mouse? Cream? It actually tasted OK, but the price was ridiculously high.

Panna Cotta, no. However, it's the nicest vegan dessert I've ever tasted. I was given two to try & was quite dubious, however I was pleasantly surprised. Don't buy it as a Panna Cotta replacement, because it's nothing like one, but it's lovely all the same. The passion fruit is very tart though, but the sweetness of the creamy pudding balances it out for the most part. Would be nice to have maybe a raspberry flavour.

I wish I’d read the reviews before purchasing. The texture and flavour of the Panna Cotta, was terrible. Very very sweet, and grainy/lumpy. The passion fruit sauce wasn’t too bad, but not worth the price at all. Disappointed.

These were truly vile and incredibly expensive for such tiny puddings. Not worth the money at all. The coconut gunge on the bottom was vaguely sweet but had a terrible flavour and a slimy loose texture, while the passion fruit on the top was so sharp, my jaw was seizing up and my eyes were rolling back in my head - I thought I would need an ambulance. Absolutely the worst pudding I've ever eaten and tasted nothing like panna cotta. The inventors need to try real panna cotta and see where they've gone wrong because this doesn't even resemble panna cotta with your eyes closed!

This is a terribly bad, massively overpriced produ

This is a terribly bad, massively overpriced product!! Whoever created it has clearly neither seen, nor eaten panna cotta. The producer should be sued for false pretences!!. From the too much plastic packing, to the poor packing design which puts puree in a top lid that's fiddly to remove and must then be inverted and poured over a very sloppy, sago like mush, this product is just horrid. Do yourself a favour, pass on it and get a real panna cotta. Hope this process allows me to award NO stars, it's really that bad. (Sadly have to award at least one star but it deserves none).