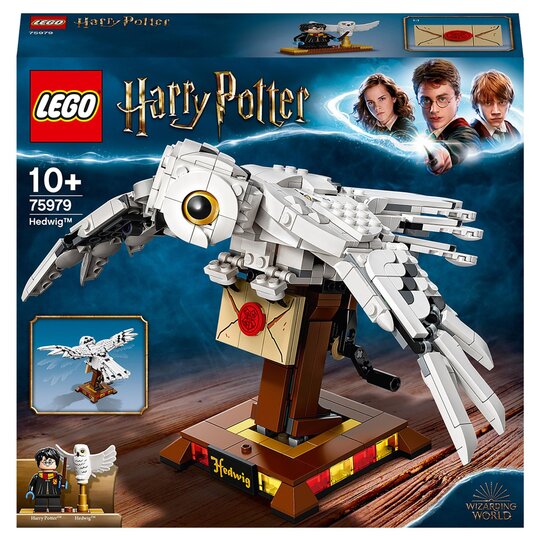 This was a super fun build! I love all Harry Potter Lego sets and this completed them!

I have the big one,it's fun ,so I get this set too. It's beautiful

Not too difficult to build, he enjoyed it very much

This was actually bought for my partner who is a beginner builder. The instructions were very clear except for 2 parts which involved the mechanical movement of the wings. The cogs used are of different sizes and this isn't illustrated in the build so alot of dismantling and guessing with some parts. With some luck she had an engineer at hand to help. She completed 98% of the build however at the end you need to be careful with the moving of the wings as parts do tend to pop off for some reason. I would maybe recommend using glue if this is something you want parts to stay in place.

Not a great set, not much play, but does have some better parts

This is a really fun build. It's surprisingly challenging.. In fact I had to take it apart part way through as the mechanism was working, until the first wing pieces were connected on, and then it would not turn. When rebuilding the second time I was not aware of doing anything different, but it all worked, so I obviously had something slightly misaligned the first time round. For the price this is a great build. I loved the combination of Technical and System. The wings flap very nicely. I was a bit disappointed the head didn't move as part of the mechanism but for the price you can't complain. My one gripe is that the Harry Potter minifigure and Hedwig are on a separate plate which connects onto the stand: 1) it's quite easily to knock off, or knock and misalign. It is connected by a single jumper plate in the middle, so can pivot when knocked. I would have preferred it to have been connected onto two jumper plates to solve this. 2) there is a jumper plate between Harry and Hedwig. The stud on top is not needed to connect anything so should - in my opinion - have been a plain plate. Having the single stud showing ruins the nice smooth effect of the rest of the stand. But if that's all I can complain about it's a very good kit!

I purchased the set via LEGO.com. There is a major instruction blunder at Step 181, which resulted in two missing parts in my set. If you look at the Step 181 figure, you see two parts on the bottom of the assembly. There is NO instruction to install those parts. This is the likely result of missing parts (i.e. did not make in the overall count).

This was an awesome build, Hedwig has so many different details and the wing movement makes it look like it's actually flying! It is a little bit smaller than how I thought it would be, but it's still great. Great purchase.

A bit smaller than expected, but still good

This set is pretty good. It is well detailed and has pretty good posability in most areas. The function to move the wings up and down works well, and I like how some positions of the crank can allow you to have the wings be posed upward or downward. The stand is well done, although I do feel it's dumb that the letter has stickers. The minifigure selection is a nice bonus to the set. Hedwig makes sense, but it's also nice that Harry has a new torso, and it works well. The value is pretty solid. There are a lot of pieces for the price, and although the pieces are mostly smaller, the overall size feels right for the price. For the pros, there are 2 things I have an issue with. The mechanism for the wings does have some exposed areas and some odd details throughout it, and in some ways, the body feels a bit smaller than the box makes it look, although that can be offset by the rest of the build looking bigger than on the box. Overall, it's a pretty good set, but I don't think it's perfect due to some of the mechanism being a but exposed. If you're interested in it, I recommend it