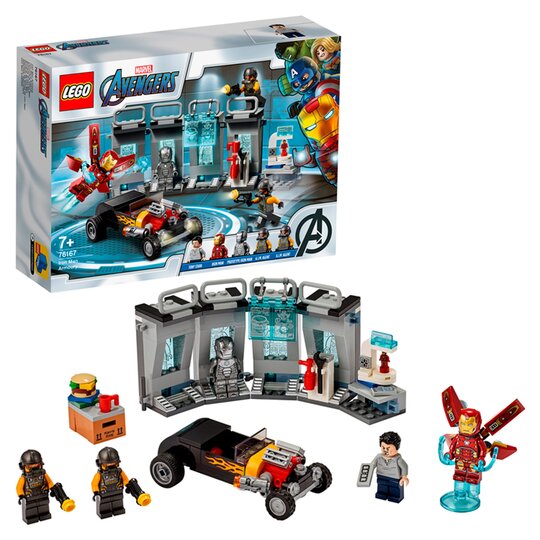 I love this set! I added it to my Hall of armor, which I placed on a baseplate, which I used some of my own bricks and the Malibu mansion set from 2013 to make a nice Malibu mansion mega build/moc. The Tony Stark figure is a good figure if you using him in an AOU, Civil war, Homecoming, and Endgame setting, Prototype (mark 2) is a great figure and a much appreciated one by me. The Aim Agents are great add ons and they make a great army. The Iron Man figure is good but common. Overall a B+

I love the set as an add on to 76125. I am so happy it has five figures set has value for money immediately. Pups to be happier. Two Pieces arrived damaged but could be worse. I am totally in love with this set

A simple but enjoyable build that connects nicely with the Hall of Armours set from the Endgame line, which allows for more suits to be displayed.

So much potential, so disappointing

I have the Original hall of armours set and when I heard an expansion was coming out I was really looking forward to this. Clearly having had a sticker print for the Mark XXV Striker in the last set and a smaller image of Mark XXXV Red snapper these would be the ideal choices of suit to feature, but no they have to link it to the game so we get "prototype suit" instead of mark II and whatever this hybrid endgame suit is supposed to be. But still we get a tony stark figure right only he doesn't have an arc reactor under his shirt because its a recycled print from another unrelated set. The head is a dual print but what is the point of the HUD printing when you can't lift the helmet visor! The Hot rod build is weird and so much less well done than the one given away for free just a few months ago. Even the burger doesn't have a seasame seed bun lid even though you made one for the Scooby Doo Build!