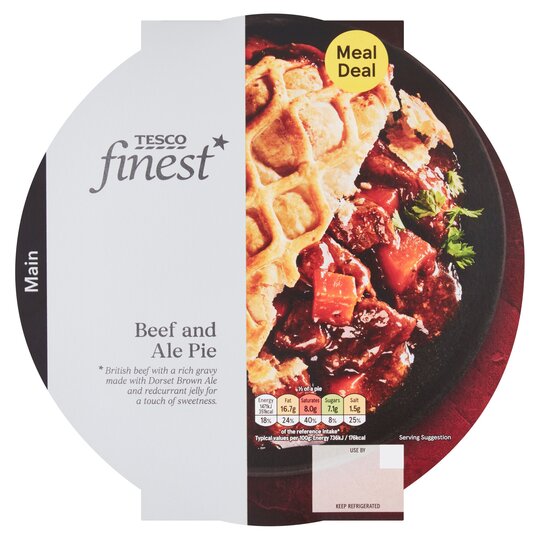 Instructions: 190°C/Fan 170°C/Gas 5 20-35 mins Remove outer sleeve and film lid. Place foil directly on a baking tray in the centre of a pre-heated oven. Leave to stand for 1 minute after cooking. Cut pastry lid in half with a knife and using a flat utensil lift out half of the pie.

If you enjoy a good meaty pie, this is not for you. What meat there was, was mushy. The veg in it were woody and the gravy watery Feeling very disappointed

Bargepole - you have been warned!!

The jus soaked puff pastry top would not puff up, even when subjected to fan 220deg for 15 minutes. The "filling" was negligible and the meat was tough!! The BEST part of the product was the well made aluminium dish, which can be used again. This is laughingly described as a "TESCO FINEST" product, this in my opinion qualifies as one that maybe prosecutable, so bad was it. Avoid like the proverbial plague, you have been told and will only have yourself to blame when you encounter the same as the rest of these posters.

Disappointed, good favour but insufficient filling. The lattice puff pastry didn't rise so there was not substance to it. We buy meal deals twice a week and most, this one wont be repeated. This is one of several which are listed as "new range" . This is the second that disappointed us .

Nothing good to say about it. The meat was tough a

Nothing good to say about it. The meat was tough and chewy and not much of it. Pastry tasteless.

Very disappointing more vegetables than meat. Pastry soggy as had been tipped so gravy soaked to pastry top. Label says beef and ale pie should read vegetable and beef pie very misleading and very expensive for what you got. Would not buy again.

Will not buy again. Poor quality.

Too small for two, too big for one. Not a pie at all but a meagre stew with a pastry lid. 3 pieces of meat and a few carrots, nothing like as well filled as the photo. Very poor.

Was really looking forward to eating this, but it was awful. There was probably only 5 or six tiny lumps of meat which was chewy and was flooded with thin, tasteless gravy making all of the pastry soggy. Definitely not worth being called finest, or the amount of money it cost.

Not the Finest Meal Deal we have come to expect

Very disappointing. We have regularly ordered a Meal Deal of late, and enjoyed all of them to date, often disagreeing with other reviews, but this was very poor. Very little filling, the pastry top was virtually lying on the bottom when we opened it - nothing to hold it up and it was soggy and rubbery to eat. Very little meat. Nothing at all to like about this. Will not buy again.

Absolutely awful , small amount of cheap chewy meat. I bought this for a quick meal , I had previously bought an M&S steak pie before and as the price was similar I felt the quality should be the same. How wrong , this Pie was so poor I will not risk buying Tesco finest range again ‘complete rip off’. How can Tesco get it so wrong?

Agree with the other comments, hardly any filling, meat tough and certainly not worth the money.