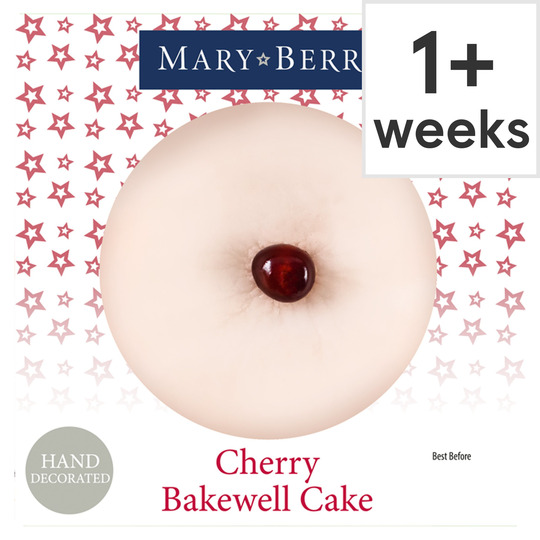 Store in a cool, dry place. Once pack is opened store in an airtight container.For Best Before see top of pack.

Film. Not Yet Recycled

Although every care has been taken to remove pips, some may remain.

i am sorry to say that this cake has no resemblance to a Bakewell except the taste of almond essence basically its a poor version of a Victoria sponge flavoured with almond essence with a dollop of thin white icing on the top Topped with a single cherry Very poor i suggest Mary berry gets her name off this pronto!!!

Disappointing - could barely taste the almond - the sponge was very dry. Only redeeming feature was the jam which was full flavoured. Very sweet overall.

I love cherry but this was a big disappointment. You would be better off buying a Tesco Finest cake. I think its only priced because it has a cooks name on it. Not a good looking cake either.

Mr Kipling must be laughing his head off!

Does it look anything like the picture of the cake on the box? A yummy looking slice with a sumptuous layer of jam and topped with thick, sweet icing? Does it **** as like! The actual thing that ended up on my plate looked like it came out of the bog-standard cheapo range. What a rip-off.

Sure Mary Berry can do better than this!

Dreadful, so dry was like eating a mouthful of sawdust.....never again!

I thought it was quite nice. Light sponge, the rig

I thought it was quite nice. Light sponge, the right amount of icing, nice flavour. It did look as if it had been made by a five year old and it,s a bit overpriced probably because of the Mary Berry association but I will buy it again.

Dry and tasteless....surprised Mary Berry would let her name be used for this

Dry and tasteless best way to sum it up :-(

Dry and tasteless best way to sum it up :-(

Mary Berry would not be proud of this cake

This cake was okay. It tasted a bit almondy but was quite dry. The sloppy way it was finished off was why I gave it 3 out of 5. The central cherry was rolling about loose in the box and left a dent that showed it had been plonked on way off the middle. I would be embarrassed to offer this to anybody other than family and I expected better quality from Mary Berry.

I had read quite a few reviews that the cake was on the dry side. I wasn’t concerned as I thought the layer of icing would make up for it. However the layer of icing was so thin you could see the sponge. I personally didn’t find the cake to be dry and I did enjoy the sponge and jam. But the lack of icing for me let it down and I thought it would be a bit better considering it was Mary Berry. Overall it was ok but was a bit expensive for what you got. The one I bought might have just been short on the icing but if that’s not the case I don’t think I would buy again.