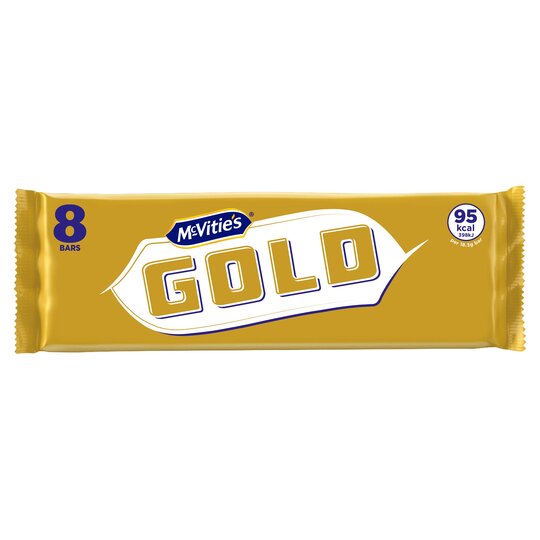 Store in a Cool, Dry Place.

Typical number of bars per pack: 8

They are literally smaller in length than my finger?! And I’m small! So disappointed, not worth the two bites you get out of a bar.

Wouldn't have bought these had I been shopping in

Wouldn't have bought these had I been shopping in person and could have seen how pathetically small they are now. I was profoundly disappointed when the turned up about 20% smaller than they were the last time I bought them.

3 stars are not based on taste, but size. In the words of my daughter: 'These should now be re-branded as GOLD NUGGETS instead of Gold Bars as they have shrunk SO much, they are now a joke as a 'bar'. They are literally bite-sized now!

Disappointed to see they have shrunk considerably.

These are such a rip off, so small compared to what they were but the price stays the same

I love these bars but Mcvities have shrunk them so much, they're tiny now!

Going for Gold? Not with these.

Considerably smaller than they used to be which is such a shame as I now find I end up eating two instead of one-which kind of defeats the purpose of making them smaller to combat the long standing issues with obesity! Still taste nice, however.

What has happened to these bars. So much smaller a

What has happened to these bars. So much smaller absolute rip off. Bring back the larger bars. These aren't bars but nuggets. The same price as the larger ones used ti be too.

Nothing fun about these 'fun-size' bars

Way smaller than they used to be. Not value for money