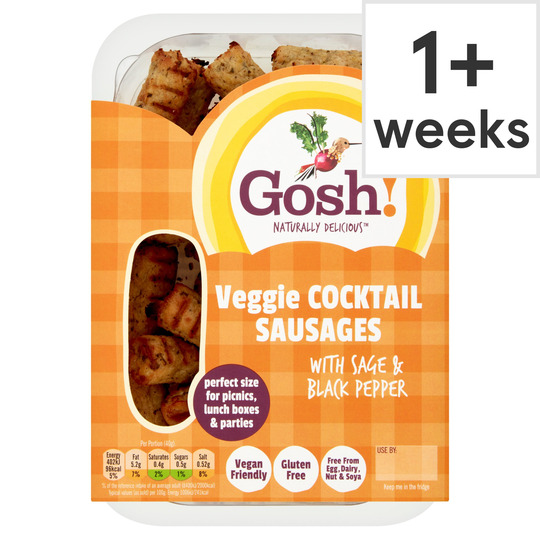 Keep me in the fridgeSuitable for home freezing For Use By date, see front of pack. After opening, eat within 3 days and within the stated Use By date. Freeze on day of purchase and use within one month. Do not refreeze once defrosted.

Warning: Although every effort has been made to remove stones, some small fragments may remain.

I actually really like these. When you open the packet it smells of cocktail sausage which is a nice surprise. Flavoursome and not dry. My toddler who has a dairy and egg allergy really likes them too. A good number in the packet.

Really not nice rather like eating cold stuffing with bits in.

These are superb. They're veg based so don't have that meat substitute texture or taste. They also have no yeast extract, soya or hydrolysed protein so great if you have to avoid these ingredients. Also no vile coriander leaf (just ground coriander). These are really tasty and filling and make a quick easy, snack. These are not overprocessed or made to resemble meat if you prefer to eat traditional veg based veggie products.

Quorn ones are better

I was disappointed in these. The texture was dry and not really sausage-like, and there was an odd aftertaste. On a plate with other salad stuff they'd probably be OK, but they're not all that good on their own. Quorn ones are better.

These are very nice - not a "fake meat" option (which I personally really dislike) but instead made from beans. This means they have a different texture to other veggie sausages - similar to falafel, it is quite dry-but I prefer this. They are well seasoned and the kids (both veggie) like them too. Haven't tried them heated up, we usually just snack on them cold with salad. Nice to see something like this that isn't trying to replicate the taste/texture of meat - not all veggies/vegans want that!

Very tasty, I mash up a few cold ones in a bowl, add cooked rice noodles, with courgette and mixed peppers and some ground black pepper and mix together, makes a lovely meal. I also like them oven baked until golden brown...lovely

Very tasty and different to 'sausage type' snacks. Not everything has to resemble meat!! Good for snacks or lunch bites ; tea time.

Very tasty and nice flavour. The texture is not bad but they are quite crumbly (similar to a falafel) and a dry (we dipped them in a little salad cream). I would buy these again.

Very dry and not much flavour

I found the texture dry and a bit 'sawdusty' and they did not have much flavour. I think 'vegetarian cocktail sausages' should have some resemblence to 'real' cocktail sausages but these did not. Will not buy again.