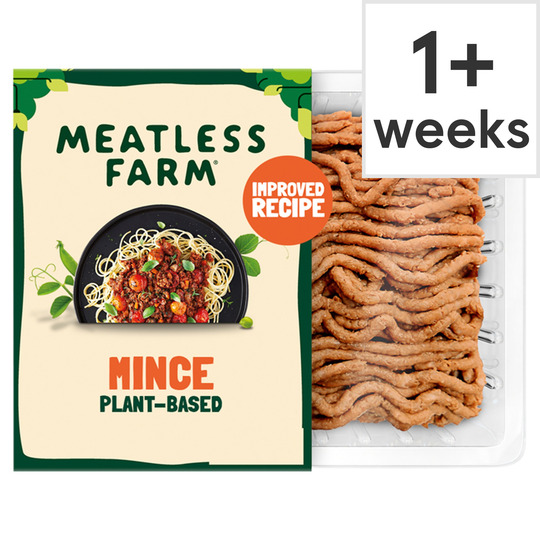 17%of the reference intake
Saturates
0.8g

5%of the reference intake
Sugars
1.1g

13%of the reference intake

Shallow Fry
Instructions: Remove all packaging.
For best results use mince directly from the refrigerator. Remove all packaging. Heat a non stick pan on medium high heat, add some oil, gently flake the mince into the pan and don't touch for one minute. Continue cooking for 12-15 minutes stirring often. Add more oil if desired. Finish preparing your favourite dish as required, serve and enjoy!
Ensure product is piping hot before serving.

Make sure to brown the block first!

I made some taco's with this mince and it was incredible! Added in some spices and served in lettuce wraps - so good! Has to be the best plant based mince out there! Jus make sure to brown the mince as a block first, to make sure it all cooks properly and doesn't break down too much! Going to try it in my spaghetti bolognaise tonight!

YUCK - go for the real thing!

Absolutely disgusting. Go for the real thing not this factory made food like rubbish. I dread to think of the food miles in this product, since most soya in the UK is imported. Eat real British beef!

Not the best, but ok.

A rather high salt content, and took a lot of seasonong for the chilli I used it in so not too impressed, while good to use as a bulker it`s expensive so I`ll be sticking to quorn.

The best of the rest, but gives me cramps

I really miss the heck and glory branded veggie mince. This looks similar, however this gives me abdominal cramps and so I can no longer eat it. :( My children don't like this one as much either and this one is 'the best of the rest'. Bring back Heck and glory!

We have tried and previously been unimpressed with most non-meat mince, especially the soya-based ones, which we have found mushy and tasteless. The look and texture of this fake mince is pretty decent providing you fry first and don’t overcook. Works well with rich and spicy sauces. Having tried in chilli, bolognaise and moussaka, I can honestly say we didn’t’ really miss the meat. Reasonably healthy too with just 9% fat and 23%protein. Will try making meatballs next.

THE. BEST. This mince makes the yummiest bolognese i’ve ever had, including back when I ate meat. It cooks exactly like meat and the texture is spot on. Absolutely love it cannot recommend enough.

Tastes disgusting and smells rank when cooked. I m

Tastes disgusting and smells rank when cooked. I made bolognese and no amount of other ingredients could hide the awful after taste.

Superb and a fantastic alternative to beef mince.

Superb and a fantastic alternative to beef mince. As a Vegetarian it is so difficult to find an alternative, having tried many brands this is the best I have ever tried, have used in taco’s, chilli and spaghetti - perfect.

Vegan and gluten free! It is so hard to find products fitting both, and I love this mince. I've been vegan for 15 years and been through a lot of brands. I don't remember what meat tastes like so can't compare for you, but this is good!