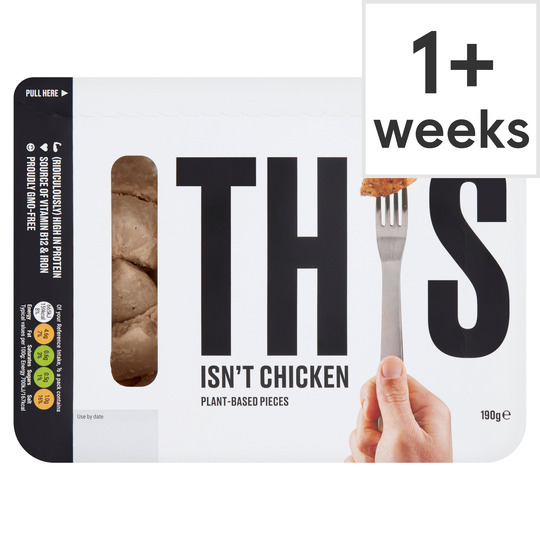 Clubcard Price
Of your Reference Intake, 1/2 a pack contains

Store chilled 0-4°C. Once opened, eat within 24 hours.Suitable for freezing - freeze on day of purchase and do not refreeze. See front of pack for use by date.

Shallow Fry
Instructions: For best results (from chilled): pan-fry for 1-3 minutes with a drop of oil on a low heat. Perfect with pasta, salads, curries - Basically All of The Recipes.

Really nice stir-fried until browned. I coated in

Really nice stir-fried until browned. I coated in a strongly-flavoured sauce so didn't really taste the salt and pepper flavour of it. I'm not vegetarian but enjoyed this and would buy again for sure.

Not nice smelling or tasting

Really unpleasant smell when opened (like gone off real chicken) should've chucked it then but didn't want to waste food. Fried very dry and the taste was like eating bleach/chemically infused chunks, now that I've tried this product I will not be buying again and wouldn't recommend. :(

This is the WORST Vegeterian food I have ever tasted EVER! Ive tried the Chicken and the Bacon and it is VILE ! Dont waste your money, the smell and texture is awful I still tried it and the aftertaste is awful and it stays in your mouth for ages! I eventually got rid of it after eating half a packet of mints. Avoid

Wanted to like these more because the texture was really good in many dishes but the aftertaste wasn't pleasnt.

It smelt so bad like.. drainage smell when opening

It smelt so bad like.. drainage smell when opening that me and my partner thought it was the dishwasher. When we smelt it my partner nearly threw up and it subsequently went into the bin.

so similar to chicken

the best tasting vegan chicken so similar to chicken

Found it very salty, more than I'd expect from 'salt and pepper' flavour. Texture ok. But wouldn't buy again.

I've been vegan for over 20 years, and have tried every kind of meat substitute. This is one of the worst - the smell was awful, the texture 'clammy', and it tasted as if it had gone bad. This kind of product actually makes me rather angry, as it risks putting people off vegan products, when there are so many great-tasting substitutes out there. Such a shame Tesco no longer stock Frys chicken and beef strips, my go-to substitutes for many years.

Definitely not for us, others may disagree!

Followed cooking instructions exactly, having read the reviews, but smelled odd, tasted odd, looked ok though, to be fair. Never again for us, but it's always worth trying new products, in case you find the perfect...whatever!

Not for sensitive noses!

The smell is unpleasant and overpowering when you open the packet - instantly reminded me of 'on the turn' raw chicken. I almost threw it straight in the bin but it was well within it's use by date and then I read a few reviews which confirmed this is normal! Very large pieces which do hold together. Texture is close to that of a chicken thigh, but the flavour is off. It's probably the closest vegetarian thing you can get to chicken but I think I'd rather stick to replacing the chicken part of a meal with a vegetables, beans and/or mushrooms. I wont buy again.