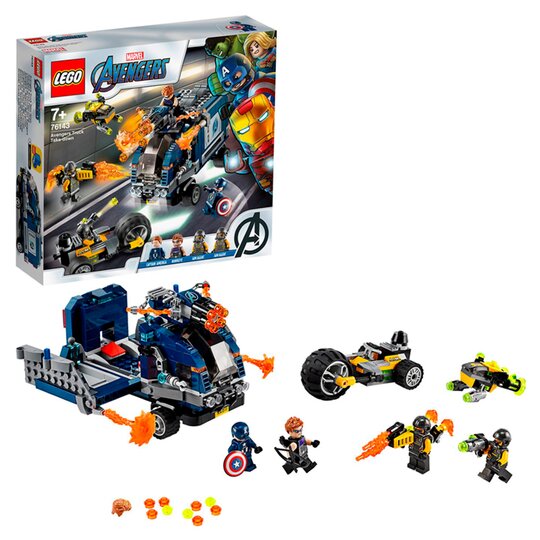 Apart from the minifigure selection, this is a terrible set. The building experience is not much fun, even though there are some interesting build techniques. There is a lot of waste, waste of part usage and space. Many of the parts/bricks are quite good and could be used for better builds. If you are an avid fan of The Avengers, you may like this regardless?! I don't recommend this set to anyone.

This is a great set. Definitely my favourite (so far). The truck is nice, with the foldout 6-shot crossbow and everything, but the flamethrowers on the sides were kind of useless. I was so excited to finally get a real Steve Rogers minifigure, because all I had so far was the one from the Captain America: Outriders Attack with the Quantum suit, gray face and helmet. The Hawkeye has to be my favourite, though, because he's my favourite Avenger. The A.I.M. trike is really cool. The only problem with it is that the drone falls off easily. Overall, it's an awesome set, and if you like Marvel, you like Lego, and you have 50 bucks, buy this.

A decent set with a pretty good price is an overall recommend to any marvel fans. I'm glad a non - mcu set has come out and we get a new figure for both captain and Hawkeye. I am not a huge fan of the AIM agents though. The set itself is nice play and a good build overall. Some pretty good functions and nice color scheme makes me recommend this set to a LEGO and/or marvel fan. (Especially if your more of a comic guy)

Now I understand there are some marvel fans out there including myself but I still think LEGO should stop making marvel until this game because now we actually get things in the game unlike the mcu sets which rarely actually appear in the movie But this set is cool room to store figs and great action features the only negative is it is a bit on the expensive side. I like the guns and the use of cockpit piece anyway thanks to this video game marvel is back!

I'm only 14 but I love collecting Lego and displaying them on my shelf, especially Marvel sets. I think this is a nice set, it's worth my money and I think it is a good Lego set overall, but one flaw is probably the switch in the the back to flip it open, but it's a little one so other then that, good set.

As someone who recently go into LEGO Marvel, this set was perfect for me. It was nice to get Captain America's shield, since previously I just had his lame Wakandan "shields". The build is overall very aesthetically pleasing and fun to play with. Pros: Great value in terms of cents per piece. Really nice looking truck and nice color contrast with the bright yellow/green AIM agents stuff. The truck's interior is fairly roomy with room for minifigs. Great minifigs, and a fun little drone. Sick looking turret on the top that can be stored in the interior. Cons: Not much. If I had to nit pick, there were a decent amount of stickers, but at least they keep the price down. I also think the orange lasers on the side look kinda weird.