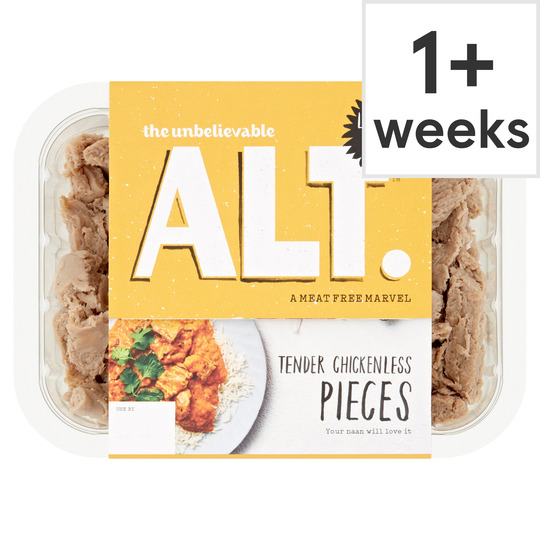 of the reference intake*
Typical values per 100g: Energy 637kJ

For use by date see top of pack.Keep refrigerated. Once opened consume within 24 hours and always within the use by date. Suitable for home freezing. Freeze on day of purchase and use within 1 month. Defrost thoroughly before cooking, use the same day.

Hob
Instructions: Simply use instead of chicken in your fave recipes.
14 mins
Heat 1 tbsp of oil in a non-stick frying pan over a medium heat. Remove all packaging (obvs) and cook your chickenless pieces for 7 mins, stirring frequently. Add 2 tbsp of water and keep cooking on a low to medium heat (stirring frequently) for 7 mins more, then use in your favourite recipe.
Cooking instructions are for the whole pack. This is just a guide, cooking appliances vary a bit, so always make sure your food is piping hot.

This is the best chicken substitute ive ever used. Absolutely blown away. I fried it in oil like the instructions on the packet then stirred it into the curry sauce at the end and it turned out perfectly, slightly crispy on the outside but so moist and tender with an extremely meat like texture/taste. Similar to setain. My boyfriend was shocked it wasnt actually chicken. I tend to avoid quorn chicken pieces because they're a bit bland but this has made me excited to try other chickeny recipes. My only criticism is it is a bit crumbly and some bits broke into little pieces, but its not really an issue. Perhaps negative comments simmered it in sauce for a long time to make it soggy?

My boyfriends mum picked these up for me, and I have had them twice now, once in a fajitas bowl and then in a ‘chicken’ tikka masala. Both times absolutely lovely! It’s worth noting, which I took from someone’s else review, to bake the pieces in the oven for ten minutes prior to cooking them as it takes any unwanted moisture out. And then when cooking them in the pan, instead of on their own I have cooked them both times with garlic and onion before adding any other contents. I am super fussy when it comes to ‘fake’ meat, and these have hit the nail on the head, it’s just knowing how to cook with them :)

So mushy and no flavour at all, ruined fajita night

Disgusting. Worse substitute I’ve ever had

I had better, I had worse. It's pretty standard soy "chicken".

Our favourite! We have learnt not to cook it in a

Our favourite! We have learnt not to cook it in a sauce as it soaks up a lot of it (as most meat alternatives do!) But its perfect when fried until golden and then served with a sauce - best range we have tried!

Great in a curry

I'm not really a fan of fake meats as I don't like the texture, however I really enjoyed this product in a curry. I put the strips in the oven for 10 mins first to dry them out a bit before adding to the curry and it turned out great! Much better than using e.g Quorn pieces.

The chicken had a bad consistency, soft and mushy. Didn't have a good flavour either. Sorry :(

even my dog would not eat it!

Made a curry with this the other night,it came out

Made a curry with this the other night,it came out banging!!!