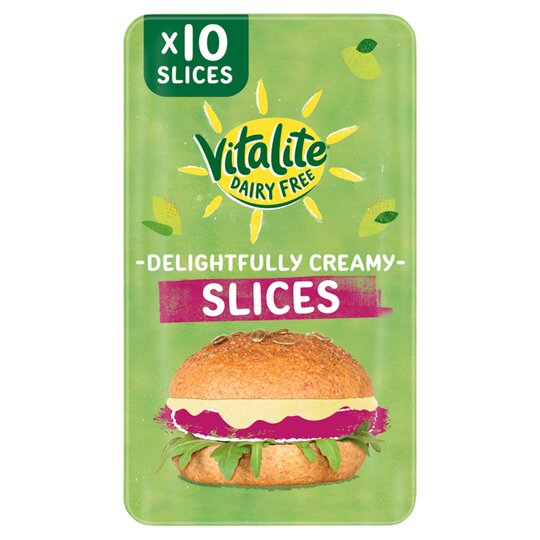 Keep refrigerated below 5°C. Once opened, keep pack well sealed and use within 10 days.

It doesn't taste like cheese. It's like coconut oil. The one I use to buy before was very good . I don't understand what went wrong with the new stock

Not bad for a vegan cheese. I tried it normal and melted It melted nicely, very creamy, however, it needed to be with something else or it can finish up a bit sickly on it's own. As a normal uncooked cheese, the texture was there, and as a mild cheese it was fine. Personally, I would have liked it to have a bit more of a mature flavour.

Sooo delicious and creamy when melted! Love it!

SO SO SO GOOD!! On their own (cold), they're not quite as appealing as actual cheese, but in a bun with coleslaw, or hot and melted in a burger or a grilled cheese sandwich - FANTASTIC! When melted, they're sooo delicious and extra creamy, absolutely brilliant. The last time I tried non-dairy cheese or other "fake animal products" was a few decades ago and I got tired of forcing my kids and myself to eat foods that weren't very good. My vegan daughter has pushed me to try again, insisting that there are many excellent products now. She's right. This is just one of a several I've tried recently and I will have no trouble switching from meat and dairy to being vegan. This particular product helps a LOT! LOVE it.

Tastes ok and would have been 5 stars but the slices are impossible to separate. You just end up with a pile of small pieces as the 'cheese is quite rigid.

Well worth a try

A real improvement on dairy-free cheese. It melts, too.

Bought this by mistake didn't realise it was vegan dairy-free absolutely disgusting jelly type of cheese and had to throw it in the bin awful.

Among coconut oil based cheeses this one is good

As far as coconut oil based processed vegan cheeses go, this one is pretty good. Reminds me of Violife cheese slices in taste and texture.

Not too bad . Still recommend the follow your hear

Not too bad . Still recommend the follow your heart cheese or Tesco own brand vegan cheese as opposed to this one.

At last a great vegan cheese.I used to like the vegan slices from a well know health store but they stopped selling it, I have never found a decent alternative till now. If your looking for a product that tastes of cheese I don’t recommend. I have never liked cheese but I like this i don’t think it taste much like cheddar cheese the closest to cheese flavour I can think of is it’s a bit like diarylea slices, I really only bought it as something different to add to my sandwich, also found it tastes really good on baked potatoes. As for the smell it’s not the best but ordinary cheese smells I wouldn’t say it’s any worse of a smell.