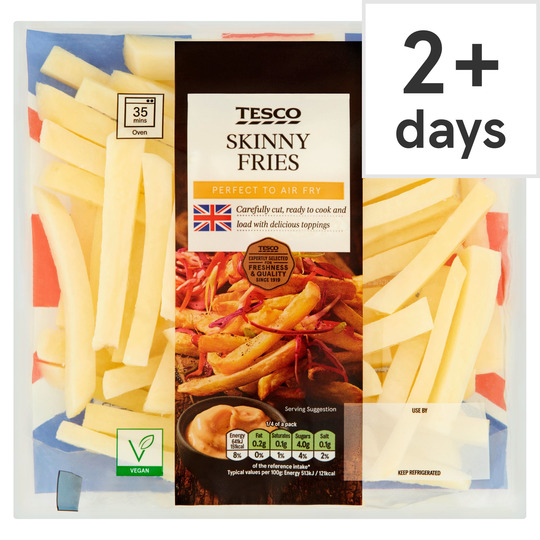 of the reference intake*
Typical values per 100g: Energy 513kJ

Oven cook
Instructions: Remove packaging. Pre-heat oven to 200°C/Fan 180°C/Gas 6. Lightly coat the potato fries with 5-10 sprays or 1 tbsp of cooking oil, spread in an even layer across a baking tray. Place in the centre of a pre-heated oven and cook for 30-35 minutes or until golden yellow colour, do not overcook.
For best results turn halfway through cooking.
200°C/Fan 180°C/Gas 6 30-35 mins
Important
Check food is piping hot throughout before serving. Do not exceed stated cooking temperature or time.
Caution
Take care as product will be very hot.

Dreadful. Total disaster, cooked on top shelf eventually to see if they would brown, but gave up in the end and threw them in the bin

Did anyone really product test these?

I don't usually review products on here. My shopping usually consists of repeat orders of products I've tried and that I like. However this excursion into the unknown is one that should never be repeated. These chips are dire. 50 minutes they were in the oven for, having been sprayed, and the finished result was still mostly white strips of brick hard potato and the smell was dreadful. The only good thing I can say about them is that they stuck to the tin foil which made their trip to the bin much easier.

Never again. Cooked way beyond recommended times but still limp, pale and unappetising. Tasted musty and stale. No amount of ketchup could disguise the lack of taste and texture.

Took ages to cook. Had to cook longer than directed. Ended up a rather raw looking white/brown rather than all over golden but thankfully tasted better than they looked. Not great though.