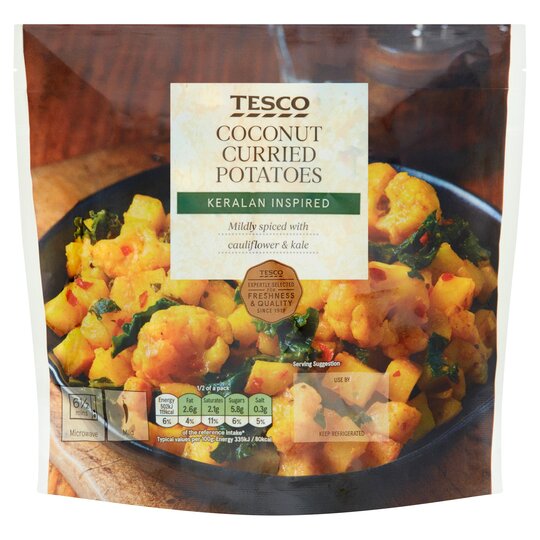 Caution: Take care as product will be very hot.

the small squares of potato were uncooked when hea

the small squares of potato were uncooked when heated in microwave as directed.

It cooked well and was super easy to prepare, but was seriously lacking in flavour, and definitely not mild, more like hot spicewise.

Well, my definition of mildly spiced is very different to theirs, unfortunately I found this just too spicy. And yes, I will be the first to admit I really don’t like anything too spicy. The sauce was also very watery, and so made the whole dish quite unappetising. Nice idea for something a bit different, just a shame it was such a disappointment.

These are easily the most revolting things I have

These are easily the most revolting things I have ever tasted. They took longer than the instruction advised for the potatoes to cook. There was absolutely no coconut flavour or seasoning, the only thing that could be tasted was chilli. Will never buy again.

I’ve had to give this product 1 star but it does not deserve it . I too don’t normally leave reviews but felt I had to for this disgusting stuff. I was looking forward to trying something new. I cooked it as stated on the packet and everything was still rock hard so cooked it a few minutes longer and thought I would try to eat it. Even if it had cooked properly it was very very hot and to have described this product as mildly spiced is wildly misleading. Yuk yuk yuk

Worst thing I have ever tasted, even smells horrible.

I don't usually give reviews but this product was disgusting that I felt I just had to !!! The whole thing was utterly without flavour. The texture was awful - everything was SO hard - I don 't know how they managed to achieve that !!! I cooked it as instructed and then I doubled the time and added water to soften it but it all still remained 'rock hard'. There was NO flavour so I added yoghurt and salt and indian spices and further cooked it in the oven but absolutely nothing changed. I have to say that this was the worst thing that I have ever tasted and I actually paid money for it ! Don't repeat my mistake - give this product a miss! - If I could give it a minus 5 stars I would !!!

The potatoes are so hard and undercooked. Tried to put it back it for longer but didn't help. Shame potato ruined it as the little cauliflower and kale I ate tasted nice. Don't waste your money.

We love Indian food and were really looking forwar

We love Indian food and were really looking forward to trying this dish. Sorry, Tesco, but it was disgusting. On top of that, even after 5 minutes on full in the microwave, the potatoes were still uncooked. Not sure why Tesco's tasters thought this dish was edible. The standards are usually so much higher.

Quality was fine I microwaved it for 5 min and 30 seconds as per the instructions but both the potatoes and cauliflower were still hard. Not nice at all.