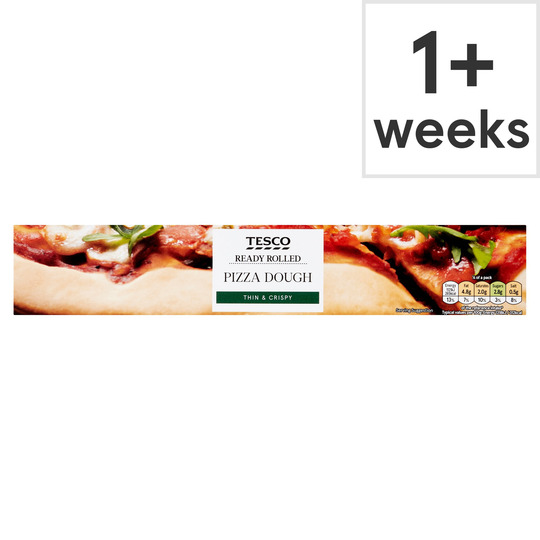 Keep refrigerated. Once opened, use immediately. Not suitable for home freezing.

Instructions: 200°C/Fan 180°C/Gas 6 15-25 mins Remove from the refrigerator approximately 10-15 minutes before use. Unroll the dough and leave on baking paper provided, prick the dough with a fork and add your toppings to the base. Place on the middle shelf of pre-heated oven for 15-25 minutes or as stated in your recipe.

Total waste of money, the pizza dough stuck to the

Total waste of money, the pizza dough stuck to the paper and spent ages trying to unpick it. The dough was obviously still raw. Would definitely not recommend.

Never reviewed anything before!, but had to comment on this. Really nice crispy dough. Kids hate the pre-made ‘hard’ bases as they taste like ‘cardboard’... plus this is a big base. Yes, can be a bit fiddly to unroll the base... hence 4 stars... but not a huge issue. You should leave the paper on to cook the pizza, and it then comes off easily afterwards...

A nice addition to my freezer

First time I tried this product - it baked nicely! A good sided dough that you can use own toppings. I will poll out a little next time :)

Really small and doughy even after trying to cook just on a wire rack. Would not buy it again.

Paper in a pizza should not be a thing....

As a number of others have noted the quality of this is questionable. I managed, albeit it took about 20 minutes to unpick most of it from the paper although I made no guarantees to others that their pizza wouldn't be paper free... Texture is far too sticky so not easy to peel, despite following the instructions. Although there's clearly differences of opinion based on the reviews it's clear there's consistency issues with either how it's manufactured; stored; distributed that cause the common problems that people have experienced with it. Won't buy it again, but will look for alternatives.

It's really nice and easy to make pizza with! Unro

It's really nice and easy to make pizza with! Unroll it straight away when removed from fridge and bake it without removing the paper. Bad reviews are just the product of instructions not followed

This dough was really sticky and salty.I have brought before and been fine but lately it has been very poor.

As a number of reviews have said, terrible quality dough. Could not unroll as much too sticky. If we’re going to have to roll it in a ball and take the rolling pin to it ourselves, just sell it in a lump.

I'm baffled at the negative reviews. I use this re

I'm baffled at the negative reviews. I use this regularly and have had none of the problem stated. I roll it out straight from the fridge, its a bit fiddly to start with. I use it as a square rather than trying to reform it and I leave it on the baking paper. I also flip the edges, putting little bits of mozzarella in to make it a stuffed crust! I would say it is a bit underseasoned, which is great for me as I'm not a massive fan of salty food, but the rest of the family just add salt to suit them. I don't usually write review but feel that all the negatives are unjustified, and PLEASE Tesco don't remove it - it's the only Pizza I like and it's fun to do with the kids!