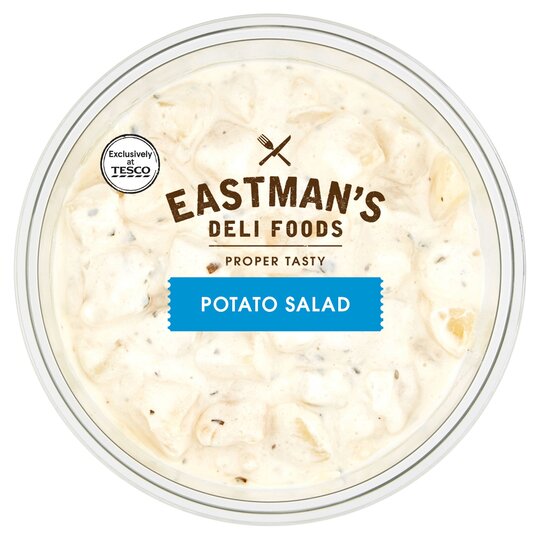 Very convenient to go with other salad items and t

Very convenient to go with other salad items and tasty too

The product if fine but the shelf life is only two days or so I am told by Tesco customer services.

Absolutely awful! Ended up putting it in the bin and going without! Tiny little squares of very solid potato that are covered in skin, some pieces were mainly skin and no potato. Dressing had absolutely no flavour. Never again!

Eastmans failed with this one

Not as good as the previous version

The previous small tubs used to be lovely. This is rubbish. The potatoes are hard, the sauce is tasteless and some potato has skin still on. Why do they have to change things?

I have had no issues with this salad. Very good value for the money. I had it as an accompaniment to a meal and would certainly buy again.

Potatoes raw. Do not buy. Made an official complaint (observation) and after successive emails (give them there due) I did receive a £5 gift voucher. I did say to Tesco I was not looking for monetary compensation I just wanted a bad product investigated. I will repeat until they resolve the problem do not buy. I bought 3 tubs....all the same so not a one off. It's up to you.

Bought this before and totally fine, the potato was in cubes as one would expect. This time around really really bad. Just a lot of mayonnaise with pulpy potato floating in it. Hard to believe its the same product. Will not be purchasing again.