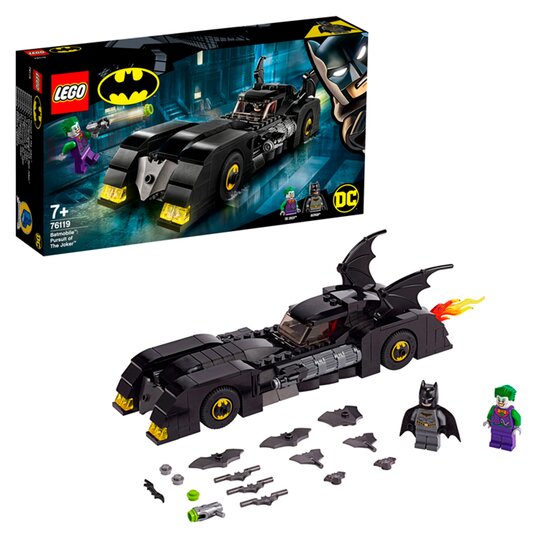 One of the best Batman sets

It was an extremely fun build and it looks absolutely fantastic. It already has a very strong similarity to the Tim Burton film's batmobile and is easily modifiable to look nearly exactly like the one from the film. The one thing I wish was a bit better was the selection of minifigures. Batman and joker appear in nearly every set so I wish there could've been another villain or maybe different looks to the two characters. Either way this set is fantastic and I'd say essential for any LEGO Batman fan.

It was a unique build. Awesome build. My boys love legos so I built this for my three year and he loves it. They only thing is I was missing one piece 303926. But being a dad of legos and a fan since I was a kid. This dad had backup peices it wasn't black but blue but made it work. Thanks Lego keep up the awesome work.

This was an enjoyable build, not too many custom pieces & some great car-chassis build ideas that I will reuse. Classic Batmobile style & a nice array of accessories.

I have already reviewed this set in the bat-cave set with more detail along with the bat-wing, so if you want to hear more about this set, go read the review und the bat-cave, however I did not review what I did not like about the set. it is not a fair fight! batman has his heavily armored car and joker has a, stud gun... I wish that it came with some sort of defense for the joker, or a vehicle like in the bat-wing set. it came the batwing and a helicopter, and a police car. I mean come on! but there are positive things in my other review.

"I gotta get me one of those."

This is my 1st batmobile, and I love it! The figures are awesome. Rebirth bats and the dc super villians joker are sweet. The set itself is a sturdy awesome build, don't really care for the stud shooters though. I wish there was one more figure, like nightwing or batgirl, but its still awesome and I would highly recommend it.

Circa 1989?...pretty close to perfection

I have had my eye on this set since first rumors and pictures surfaced. I picked this up at my local Walmart yesterday. There are no stickers in this set (Yes!!!). There are 3 numbered bags and 1 instruction booklet. The build took a little over an hour to complete. The build is straight forward and fun. I think the attention to exterior detailing here is quite good. The build is solid and there are few if any tricky building techniques. There is a mix of standard and Technic elements to give the chassis some extra rigidity. I like the stud shooter usage and the flame twirl as Batmobile moves forward. I would love to time travel back to 1989 and give this set to my 8-year-old self after just seeing Tim Burton's 1989 Batman film in the theater. I think the play value, aesthetic, and collectible nature of this set are a testament to Lego's continued evolvement. I hope Lego continues to pay homage to classic film inspired vehicles like this in the future. Would I change anything? I may change out the bat hubcap emblems for a dark grey/black disc with a silver stud in the center. Thanks for looking at my review and happy building.

First off i want to say that this is a great set, good value for money, fun to build and it looks great. However, i have only rated 5 and this is due to the continued falling quality of Lego. Many of my latest sets have been subject to very poorly printed parts and this time it is again the skin colour of Batman, it is more a dull white than flesh colour and just looks awful, only being saved by the fact tgat his helmet hides most of it. This is happening more and more on lego minifigures and Lego seem to ignore this decline in quality. You pay a premium for Lego products, and this should be reflected in its quality, at the moment it isn't. If this doesn't bother you then don't let it stop you buying this set, it is still an amazing set, if you can look past the printing issue.

Nice remake of a classic

This Batmobile is a scaled down version of the Ultimate Batmobile set 7784. The mini figures are great, the build of the vehicle was straight forward, but there seems to be a theme with Lego instructions that there are a lot of unnecessary steps or additional pieces that have no bearing on the build itself. The vehicle itself, as stated, is a scaled down version of 7784. The only 2 changes that I would make to it are to have the turbines at the front turn with the front wheels and to have the Batshield raise via a lever. Overall a nice addition to the collection and not a bad price.

I was mega excited when this set was announced as this is my favourite Batmobile. This version is a brilliant minifig scale model with some fun play features built in. My son and I had wanted to build something just like this and we were in design phase when this set was announced so there was no question about getting it. The build is fun and includes a few cool techniques and the final product is pretty faithful to the movie model imo. The one area that obviously differs though is the nose cone which has been substituted with a bat symbol, but I think this works in this model anyway and looks good. Finally, the price of this set makes it totally worthwhile! If you are a fan of the Tim Burton Batman movies then this set is a must-have.