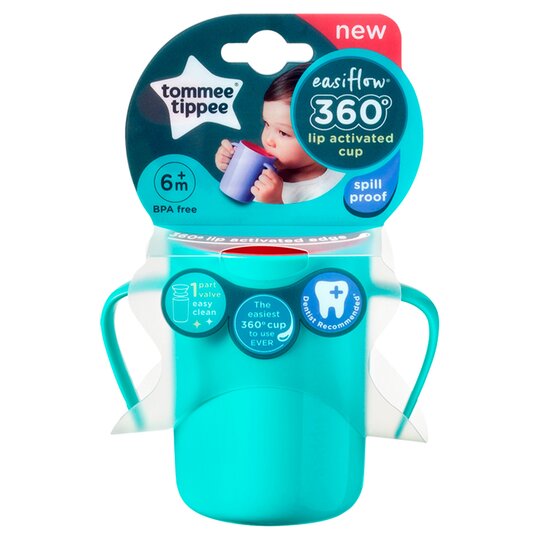 We ordered this cup for my 12month old son. We've had similar cups from other brands for his older sister so was looking forward to trying this one. He picked up how to use the cup with the non spill valve very quickly and easily. However either due to the sensitivity of the edge, because its too fast a flow for him that he hasn't quite got used to it or he's just messy we find we need a very absorbent bib on when being used. Great for teaching little ones how to use a proper style cup and sip. The open/close function of the lid was very appealing and on 2 occasions he's managed to undo it and take the lid off emptying the contents everywhere. There are also 2 small holes on the silicone that allowed the contents to spill easily. As with other 360 cups, we've found they're spill proof from the resealable edge when turned upside down. Knock it off a table or highchair and they spill. This cup doesn't come with a lid to go over the silicone which would be useful as we found we couldn't put it in the bag when out and about due to the slightest pressure causing leaks. Otherwise a great idea, but we now use ours only at home/grandparents house and under extremely close supervision.

The Tommy Tippee easiflow 360 cup works by using a concave flexible lid (i.e. it curves inwards) to provide a water-tight seal that can be broken with your lips by pushing against the lid. With the seal broken, the liquid flows, and the child can drink. All very simple in theory. However, in practice, we parents could not get it to work. The first sip was drawn easily enough, but thereafter each subsequent sip became a struggle. It appeared that the seal was so good, a vacuum was forming inside the cup preventing us from sucking any more out with any degree of ease - and if we couldn't do it, there was no way our infant was going to be able to. The lid does have vents cut in it to alleviate this issue. In theory they should allow air to be drawn in and the drink to flow, but whether it was perhaps because the cup was new, or the material a little too stiff, it didn't work for us. It's a great design and idea, but in practice we just couldn't get it to work for it to be useful and added to our baby bag. For now, we'll just have to resort to the drinking cups with manual spouts. There is also a secondary concern as to how well the cup will fare in a bag, with other assorted items. All it takes is for anything to push on any edge of the lip to allow the liquid to spill out, unlike a cup with a folding spout that would be difficult to unfold accidentally. However, we didn't manage to test this as, for reasons already mentioned, it didn't make it as far as our baby bag.

So easy to use!

My little one has loved using this cup. He's found it easy to use and I've loved the no spill feature. He can carry it around while he plays without me worrying about spilling and he stays hydrated and refreshed. Another great product TT