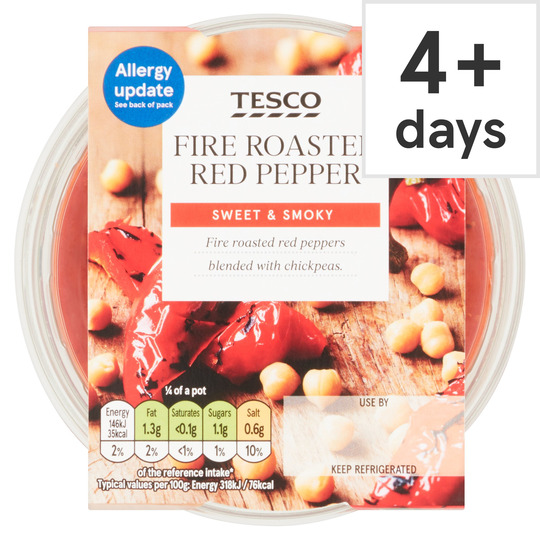 Keep refrigerated. Once opened, consume within 2 days and by 'use by' date shown. Not suitable for home freezing.

Runny with a nasty bitter taste. Not sure if this is trying to be a dip or a sauce but it's horrible

Bought this as I originally thought it was humous but it’s half red pepper and half chickpeas so a slightly thinner consistency and contains less fat then humous but it was actually really nice! Tasted a bit like Nando’s red pepper dip! Will definitely buy this again!

Really watery, threw away as no real flavour to th

Really watery, threw away as no real flavour to the pot I had.

It’s a double knockout - and then some

Proper real deal bit of gear. Think Apollo Creed and Rocky sprinting along the golden sands of Santa Monica and joyfully wrestling in the shallows of a warm ocean on a beautiful day. That’s what it tastes like.

Sent as substitute for Red Pepper Hummus this dip is rather insipid and watery with only 24% chickpeas and no hummus (although it doesn’t claim to be a hummus to be fair). An accountant’s recipe with too much water bulked up with cornflour and xanthan gum. Poor.

Very tangy and tasty with a slight kick, because of the texture its quite versatile and goes well with crisps, pitta or in a wrap. You could probably also use a pizza topper.