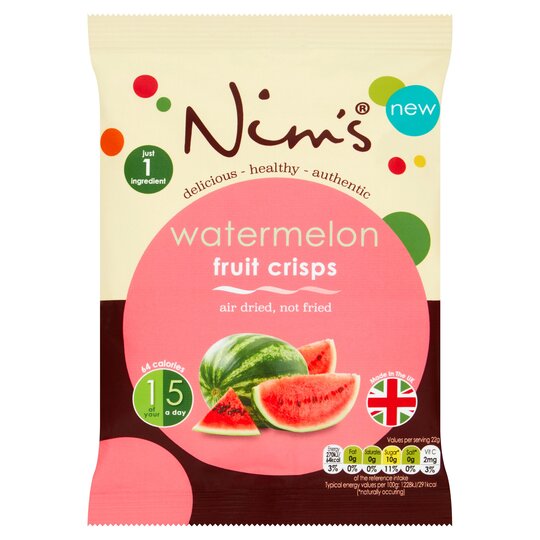 May contain the odd pip, stalk or slice of other fruit & veg crisps made by us.

My local Tesco's stocks three different Nim's varieties: Watermelon fruit crisps Apple fruit crisps Pineapple & Beetroot fruit and veg crisps Both the Watermelon and the Apple crisps are very nice, but the Pineapple & Beetroot variety is more of an acquired flavour which will probably not be liked by many people. The crisps are made without any addition of oil or any other ingredient, so are a healthy snack alternative to potato crisps. Would be good for children's lunch boxes, but do avoid giving them the beetroot crisps.

These taste disgusting and should not be made let alone sold by Tesco!

Nope. Taste like hay. If you like that idea go for it. The apple ones were really nice though.

I bought these out of curiosity, thinking, "Watermelon is mostly water, after dehydrating them, what would be left?" Rind. Lots and lots of watermelon rind, with a couple seeds thrown in, too. Basically, someone is trying to make a profit by selling off the part of the fruit that would normally be thrown away. What little pink fruit is there is pretty gross. Had to throw the bag out. No living thing would want to eat it.