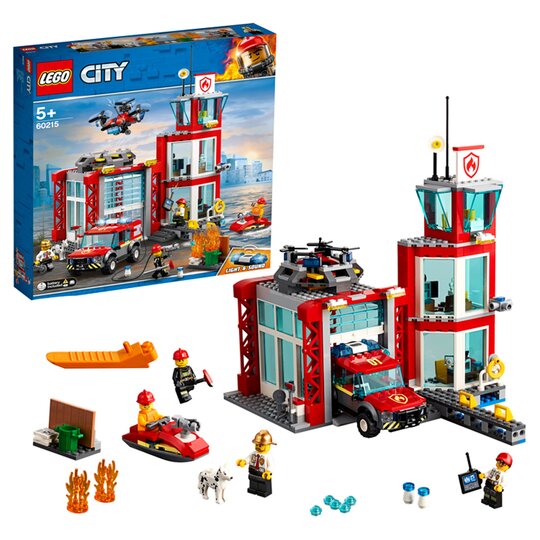 I am a little bit torn with this kit. Whilst it was an enjoyable build and has a lot of play value it did feel a lot smaller than I anticipated and there is a tinge of disappointment there. Not sure why I thought it would be quite a large completed piece but I definitely did and it is actually pretty small. There is a lot going on in the kit though and I like the fact that you get a little jet ski and a drone. The Fire Truck that comes with it is a great build and looks great completed and is really the saviour of this kit. Whilst the building gives you a garage and a couple of offices it is fairly basic but does have play value. The garage roller door does work properly and the fire truck does fit nicely through it. The play value is great with this one and you can even run training sessions for your firefighters as it comes with a little fenced off area for that purpose. Number Of Pieces: 509 Approximate Price Per Piece: £0.12 Build Time: 1.5 Hours

This is a great set because it is three story's and a garage that can open in A cool way.

5 year old loves it and got a lot of play out of it, easy build for him. He thinks it should be 5 stars!

The fire station is a good lego to put in your city, but I wish there could be a leather for the garage to open it. It's still a good lego.

I'll be honest, this is probably the lowest creative fire station Lego has to offer. Being a Lego City fan since 2011, it's safe to say that the other fire stations like the 2016 version or the 2013 one have much more to offer. Firstly, they had two fire truck entrances, but this one only has one. Additionally, they also have actual helicopters, not a puny little drone that takes up a lot of space. And the old fire stations are much bigger, sure they have more pieces, but those sets usually only take me an hour to build, and I'm sure kids could get some help from their parents if they don't know where a piece goes or if they need help getting those strings for the fire hose through the tiny hole. Finally, the old fire sets had really cool features. I can complement this set with its light-up sirens, but take the 2016 fire station, for example, it had a pole: an actual feature that real-life fire stations have, or the 2011 fire station, it had a net for catching kittens or people who are trapped inside houses (the commercial even showed them using the net for that reason). I personally actually like this set a bit, all I'm saying is it could've been better if there were more features and more pieces to make it larger.

Finally LEGO have made an affordable fire station this set is great I love how it has a small dock and the 4x4 is realistic the only thing I don't like about it is the flashing lights they are cool but are big and bulky I took them off and used brick built ones. The station was easy to assemble for me as I am a very experienced LEGO builder but a 6yo would love building this set and it would take them the best part of an afternoon. The fire station itself has a cool garage and the tower can store tones of figures and if you need more buildings they would be easy enough to add for any aged LEGO fan Overall get this set if you want an affordable fire station.

Fun little build for your city

This was a fun little build that I've added to my small city I have started, combined with the other fire sets from this year it looks great, it's a little on the small side for a fire depot, but meh!!! I did get to the end of the build and the instructions said 3 flat shiny grey plates on the top, I got 2 grey, and one gun metal grey, I've put in a parts request, but not heard anything back from them on my parts request.

By "poor choice" I'm referring to the lack of a rightful firetruck, and the overall downgrade in the building's size as compared to its predecessors. There are positives, however. The building looks very good and modern, and also uses the interior space well. I love the new colors and minifigures (especially the tan fire gear), but it was a shock for me to see that the biggest set in the new fire line isn't the fire station itself. In my opinion: same design theme, more building mass.