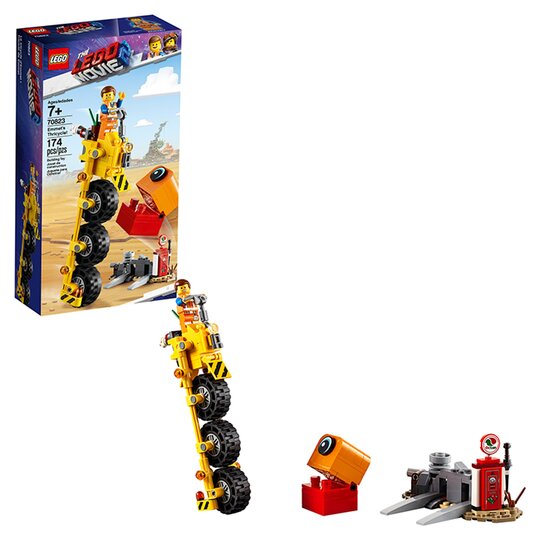 This is a very good lego set. the emmet is very great. the alien invader is great also. i love the gas station. very good, old look. the thricicle is very good. i love the three wheels. over all, GREAT JOB LEGO!!!

I have a little brother who got this set and it has one flaw, with the height and all and with only 1x3 Technic piece for support it makes it really hard to stand up. In the long term it is a pretty good set and a great way to get a Duplo alien.

Bought it for my girlfriend as she loved the film. Price is great as you get a nice build and they look great. Think recently some sets are overpriced recently especially the licenced ones but this was one I was more than happy to pay full price for. Best bit has to be the Sisters Duplo monster, its looks brilliant made out of normal lego pieces. Only remotely negative or thing i'd change is to have another Duplo monster/character as they're so good. Great set :)

Emmet's at it again!

So I've heard some strange backlash against this set for not having multiple figures and not having much to the build, however I personally think this set is awesome! I love the whacky vehicle and the side builds were really cool as well. I do wish Lucy or some other minifigures were including with this set, however its only a very small issue compared to an awesome set. Overall, the build was unique and enjoyable and having another Emmet to add to my collection is always nice and I love the gas tank's details. The Duplo thing was also cute. Thanks LEGO for making everything awesome!!!

70823 Emmet's Thricycle! is a set of 174 pieces. The set is based on THE LEGO® MOVIE 2 which is scheduled to be released on February 8th 2019 in the US. Cracking open the push tabs of the mainly purpley-blue box (with loads of colorful images of the set) reveals two numbered bags, a 84-page instruction booklet, and a sticker sheet for 8 stickers. The pieces can be used to build one minifigure, a plant, a fuel station with a catapult, and a docking station for the set's main attraction, thricycle: a strange looking vehicle with three vertically stacked tires. The build begins with the contents of bag 1. First to be assembled is the minifigure, who is one of the main characters of the movie, Emmett. He is wearing an orange construction worker's attire with blue sleeves. The reflecting strips on his work clothes have been worn out but the name tag on his right leg is still legible. Emmet's hair is reddish brown with one lock sticking out a bit, and his head has two expressions printed on it (a smiling one and a scared one). Second build is a 41-piece red and orange alien invader which looks as if made from Duplo bricks. Its hinged mouth doesn't close all the way, which is not entirely to my liking. There is a friction pin inside the hinge so that the alien's mouth will stay in a fixed position, but the alien will tip over if its mouth is opened too wide. There is a new printed 2x2 round tile (element ID 6250671) which represents the alien's single eye. The eye can be rotated via a mechanism at the back of the alien's "head". Next in line is the predominantly gray "parking spot" which offers extra support for the top-heavy thricycle. Then the red, white and gray an Octan fuel station gets built. Two of the stickers are applied at this point. I noticed the round sticker is a little tricky, I applied it only after fixing the sign on top of the pump, which, thanks to the stickers, looks old and a little rusted. The rather short fuel hose is a black whip piece. The pump is fastened to the parking spot via a clip and its angle of attachment can be adjusted up to a point. Next build is the mainly gray catapult, which also connects to the central parking spot by a clip. It catapults a large wheel rim (element ID 4299119) of which there are three more in the thricycle. I had some trouble getting the catapult to work but eventually I was able to catapult the living daylights out of the wheel rim. There are a total of 33 steps for this entire section of the build. My set came with 10 extra parts, including one whip (element ID 6092878) and reddish brown flower stem (6223678). Bag #2 contains the parts for the thricycle, which has a yellow frame, black tires, while its rims and assorted bits such as the steering column are mostly gray. Six of the eight stickers in this set are used at this stage. The steering column is hinged and flexible, a bit like in stand up jet skis. Emmet's companion Planty and its pot are the last to be built. There were 8 extra pieces in this bag, including an extra Planty (6135278). I thought the exhaust smoke and mudflaps were hilarious. Emmet steers the thricycle standing up and Planty rides at the back. The fit is rather tight and Planty has to be positioned carefully in order not to poke Emmet while he is driving. I was quite disappointed by the wheels because they are not smooth and solid from both sides, instead one side of the wheel is open so the inner structure is visible. The thricycle can stand on its own leaning back a little (this is what the foldout stabilizers are used for), but it falls over easily which is not exactly a surprise as the vehicle is rather top-heavy. Docking to the parking spot works quite smoothly, unless the foldout stabilizers are angled wrong or pointed the wrong way. For some reason, I couldn't find a good place to grip the thricycle and if I tried to place my fingers anywhere else but the cockpit area the wheels tended to stop working properly. The build is easy. As per usual, I struggled a bit with the technic bits and bobs and sweated over the stickers. I also managed to make a couple of mistakes after misidentifying some of the dark gray slopes used in the parking spot, but I did not break anything off or harm any outsiders while building, which has to count for something. All in all, I think this is a great little set with some cool play features. The thricycle is outrageously proportioned and just hilarious, the stickers for the fuel station are marvelous, and the Duplo alien invader is rather adorable instead of terrifying. It will be interesting to see if the thricycle makes an appearance in The Lego Movie 2 and if it does, for how long will it be seen on-screen.