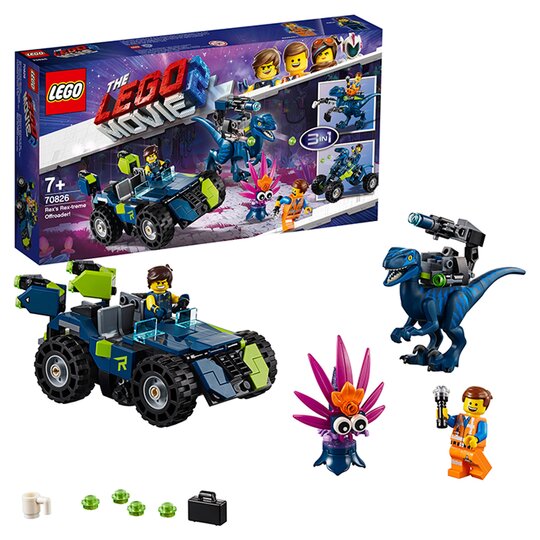 The off-roader is a well built vehicle and looks particularly sleek with all the studs covered by smooth plates. The raptor is very posable and looks awesome.

The only problem was the gun that goes on the backpack of the raptor does not attach as the instructions say it should. It is to small to attatch to the peg. Honestly a dremel would make it fit but come on this is lego they should fit.

I never watch the Lego Movie..but when this Set was on Sale i had to buy it, because of this beautyful nice blue Dino. Also 2 nice minifigs and a nice Car. I Love the colours of the Car. its a nice combination blue and limegreen.

It's easy to throw out merchandise to link in with a film release or with other endorsement tie-ins and get it wrong; but this isn't one of those times. I only have a couple of Lego Movie 2 sets (this and Benny's Space Squad) so far but they've been exceptional and I'll be buying more as a result. The temptation to create vehicles with large moulded pieces has been avoided and the Offroader element was an involved and enjoyable build which feels sturdy and robust enough for children (of all ages) to play with, as well as looking good enough to earn a place on collectors display shelves. The raptor is another solid piece, continuing the tradition of the dinosaurs introduced in the Jurassic World sets and are equally as playable. The mini figures are, well - great, but that could be my affection for Emmett and Rex coming through, and with both having reversible heads the playability again goes up as storytelling becomes easier. For once there seem to be sufficient spare "projectiles" to ensure that the kids spend more time playing and less time hunting under the sofa for missing bullets (although I will be under there later today on recovery duty I'm sure) All in all an enjoyable set to build for me, and great set for my two sons to play with. Now, which Lego Movie 2 Set should I buy next?

a simple and easy way to get a raptor and rex! ( and another emmet :b )

so i mostly got this for the dino but then turns out the main build and robo arm builds are really cool robo arm i expect but still. the weird motorized dino was underwhelming it was taking away from the dino in my opinion but other than that the main build was a pleasent suprise

More fun than I thought

More fun than I thought. I bought this Sunday at my Lego Store Grand opening event. I wanted to get the free plantimal with Rex and his big gun, and some other free grand opening items. So I picked this as one of my $50 Lego Movie 2 purchases of my total $100 purchase (earn free Lego store grand opening set and Emmet tshirt grand opening). So I had not planned on getting this. I am glad I did. It is a lot of fun. The plantimal cracks me up. It is different than the one in the polybag (which had more orange pieces than this one). This one is a tiny bit shorter. I love the inclusion of the raptor. Yes, you had me at raptor. I also like that this is a different outfit than the CMF TLM2 mini figure of Rex. YAY! It was a nice surprise how much I liked the set. I probably will never do the other two minor builds. I like this vehicle too much. LOL.

What a great build, I really enjoyed this build the car is great and with 3 seats you can add in an extra minifigure to run the swiveling turrets on the back which were a great touch. I really like the raptor that came in this set it really helps round out the set.

Really good vehicle to pick as an option.

I saw the Lego Movie 2 and decided to pick up something nice from it afterwards. I wasn't disappointed with this. The build uses a lot of strange techniques to use pieces for the alternate builds but it ends up working out really well for it! The options of 3 seats are great too, you could even make the raptor fit in the back in various ways. The whole thing is solid and its really fun to drive it around. The minifigure selection is appropriate for the scene, Rex and Emmet. Along with a mini-dino raptor, which makes a great bonus. Sure the Plantimal is small and not much against the main set, but I enjoy it a lot anyways. It didn't have much screentime in the movie, but if you want a nice-sized set from the wave, I recommend this.