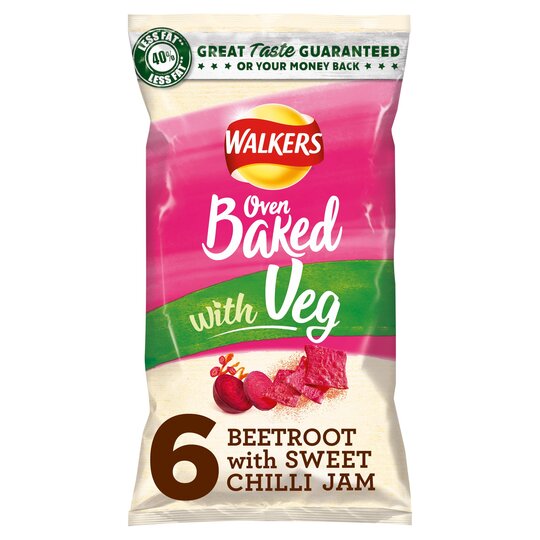 of the reference intake*
Typical values per 100g: Energy 420 kJ

Store in a cool dry place

Tasty but not natural or particularly healthy as i

Tasty but not natural or particularly healthy as implied. It's NOT slices of beetroot baked but just a mixture of ingredients with beetroot POWDER listed as only the FOURTH. Also, there are only about a dozen in each packet, no more than a small handful, mostly broken so difficult to be exact but for what this product actually is and for the amount you get, I consider the price to be too high and will stick with real vegetable crisps in future, although the brand I occasionally treat myself with cost more! I see another reviewer has a very different opinion. That's the trouble with reviews - which one's do you take notice of? Tesco's especially seem to have many conflicting reviews. I even wonder if the really bad ones, given on products I find perfectly fine, are put there by rival companies!

Be prepared to buy again!

Well the flavour was nice. However they left a slimy, sticky mashed up residue all over my back teeth after eating just 4 or 5 crisps. I bought them thinking they were beetroot crisps, but after trying them I read the back and realised they are a mix of potato, wheat and beetroot. That would be find if the texture was OK, but it really isn't. I won't be having them again and I won't try the sweet potato version either as I guess that's similar.

Bought for the first time one week ago & now we're craving them. There was some misery when they were lost. Subtle sweet pickle flavour satisfying a need for something sweet in what seems a genuinely healthy alternative. Make regular crisps seem too greasy. Seem to get a good number per packet They look a lovely colour, pleasing packaging