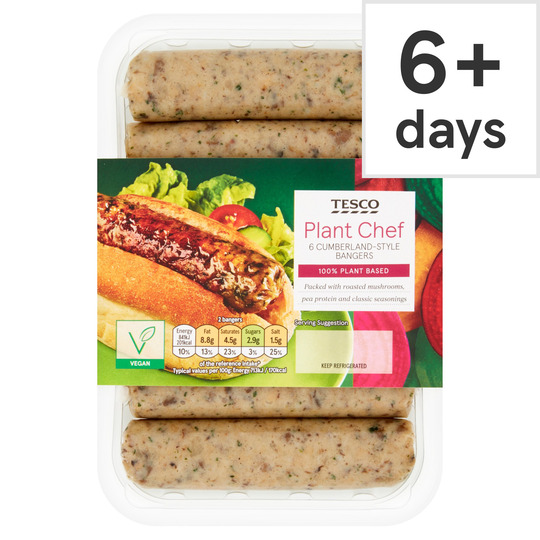 Filled into plant based alginate casing.

Instructions: 200°C/Fan 180°C/Gas 6 25-30 mins Place onto a non-stick baking tray and place in the centre of a pre-heated oven for 25-30 minutes, turning halfway through cooking.

Instructions: 200°C/Fan 180°C/Gas 6 35-40 mins Place onto a non-stick baking tray and place in the centre of a pre-heated oven for 35-40 minutes, turning halfway through cooking.

These sausages used to be my favourite!!! Absolutely gorgeous. Really savoury and herby. But the new recipe is completely disgusting!!! Couldn't get them out of the pack for a start, and when I did, they were all mangled from me handling them. When I tried them they were really horrid and such a weird colour. Won't be buying them again unless tesco change the recipe back. Such a shame. I am really missing a sausage bap!!

Change it back to the old recipe!

They used to be the best sausages ever and now they are disgusting. I really hope they change the recipe back. I don't understand how anyone can taste the new sausages and think they are an improvement. They have a horrible mushy texture and they are too peppery and fragrant. Absolutely gross - I'm gutted!

Change for the worse

These used to be our favourite veggie sausages, but there has been a recent “great new recipe”change and now they are plasticky, unappetising and handle like plasticine. Have no idea why this was deemed a change for the better, but won’t be buying again until they change back.

Used to love these but Oh My - the new recipe is horrible. All pasty and weirdly bouncy. Really harsh spicy bitter flavour. When raw they look like cheap pureed mush. The old recipe was lovely, these are horrid. Won't be buying again. Shame on you Tesco. Expect you changed the recipe to make them cheaper to produce at the cost of the product and customers. I'm coeliac and veggie so its hard to find good alternatives. So disappointed.

What on Earth have they done to the recipe? I couldn’t even get the, now bright pink, sausages out of the tray. The texture is awful, the skins aren’t sealed at the ends, I don’t even know what to do with them. Dinner ruined. Thanks a bunch Tesco.

Agree with other comments on here! These were my fav veggie sausages but do not like the new recipe. Much spicer, possibly from black pepper, mushier consistency and a strange pinkish colour. They are tasty but hope the old recipe returns or I'll be on the hunt for a new favourite and it took years to find ones as good as these!

These used to be my favourite veggie sausages. New recipe is awful - won’t be buying again. Please change it back.

Why change something that was really good?

These used to be brilliant, with a great flavour, nice texture & crispy skin & were definitely a family favourite. However when we received them in our order last week they were looking very different...a bit sludgy & pink. Sadly, having cooked them up we found they were vastly different & there has undoubtedly been a change in recipe. The texture was all wrong, they didn't crisp up to the same standard and they seemed really peppery. It was a unanimous decision that we won't be buying them anymore.

These used to be the best vegan/veggie sausages around. They were moist, flavourful and I loved them. Cue September 2021 and Tesco, in their wisdom, changed the recipe. Now they are dry and taste of nothing but pepper. Even now, ten minutes after eating one, all I can taste is pepper. I can't even try half the others because they contain wheat or yeast, which I can't have. I guess my search for the best vegan banger resumes. Shame.

What on Earth have you done to these sausages Tesco? These used to be really nice sausages with a good flavour and good texture. I've no idea what Tesco have done to them to make them cheaper but this new recipe is dreadful. There is no flavour apart from pepper...and lots of it. The texture is awful and what you've done to make pea and mushroom become pink simply boggles the mind. You did this with your veggie mince too. Why - oh why - do you keep changing recipes for products that were absolutely fine? Bad call again.