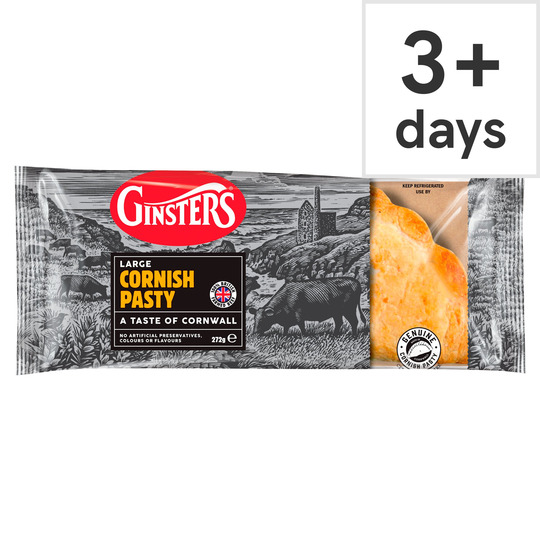 Cooking Instructions
Instructions: Remove all packaging. For best results oven bake.
These are guidelines only, appliances may vary. Please ensure food is piping hot before serving.

The pastry tastes nice when heated in the oven, which is great because the filling resembles mashed baby food. If you have tasted a real Cornish pasty then this May as well have been made on the moon.

Dreadful, never found any meat in it only potatoes & they didn’t taste great, found its way to the bin pretty quickly. Would certainly not buy again - Folk in Cornwall would be horrified that it’s allowed to be called a Cornish pasty.

A Cornish Pasty? You must be kidding ,how this company is still in business is beyond me.

Big Pasties are better than little ones

Had one for my dinner last night. You can microwave these and they taste really good. I did some toast, then put some cheese (Tesco cheese i must say) on and microwaved the lot. Together, as we only have one microwave. Yum Flipping Yum. This is sold as a large cornish pasty and is bigger than those Ginsters pasties you normally. Down in Cornwall it wouldn't be considered large. Liz's brother lives down there and despite being a veggie himself, bought us some pasties that were certainly bigger than 227 grams. But I digress and it's getting late. Ginsters pasties are good and the bigger the better.

Actually tastes like the pasties bought in Cornwall. Well seasoned.

Tasty if warmed in oven

Very tasty and enjoyable. They actually taste like Cornish pasties if you heat them in the oven

Nowhere near the quality of the old pasties

Bought it because it was half price, ! The pastry was greasy to the extent it spoiied the taste, the filling was just mush and pieces of swede, with hardly any meat if any at all. I used to like Ginsters, now they have reduced the quality no doubt to please the bean counters. it was a waste of money at half price even, no more purchases from me until they return to there old production and content methods .

These are absolutely awful these days. They used to be lovely pasties and now they're tasteless, there's virtually no meat in them, and what's there is largely gristle and totally undistinguishable as meat, uncooked vegetables, and no seasoning at all. If you're starving hungry and there is nothing else available anywhere else, then that's the only excuse for ever eating one now and even that's a tenuous excuse.