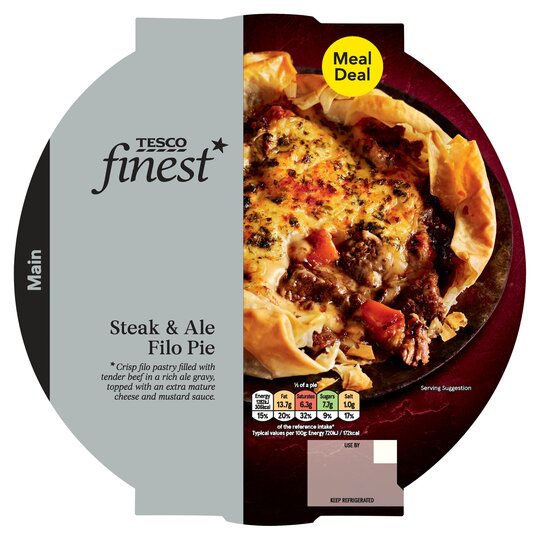 Suitable for home freezing. Ideally freeze as soon as possible after purchase but always by 'use by' date shown. Follow the preparation guidelines above. Once defrosted, do not refreeze. Not suitable for cooking from frozen. Defrost thoroughly for a minimum of 12 hours in the refrigerator. Keep refrigerated.

Instructions: 190°C/Fan 170°C/Gas 5 30–35 mins Remove outer sleeve and film lid. Place foil directly on a baking tray in the centre of a pre-heated oven. Leave to stand for 2 minutes after cooking, before using the parchment paper to lift the pie out of the foil.

Produced in the U.K., using beef from the U.K.

This is delicious. The negative reviews are from people who were expecting a top crust and a more traditional pie. I looked at the picture and knew what to expect. I found this pie delicious and will certainly buy again. My only criticism is that it is expensive for what it is. Should be half the price.

Sorry but this is horrid! Very little meat, lots of slimy mushrooms and some large pieces of uncooked carrot. The pastry was also slimy apart from a small crust at the top. Even the dog refused to eat it.

This is a low meat, very sweet product. If you are expecting a steak pie this is not for you. There is a paper under- lay within aluminium tray, which is not mentioned in instructions. Just in case you want to choke your guests as well as disgust them.

Like other reviewers, I would have preferred a 'proper' meat pie. I assumed the filo pastry effort to be the 'small portion' dining option, where one is supposed to savour the nuances. If so, it should be being made clear, given my main criticism of this so-called pie is that it does not make a substantial main for 2 persons.

So sweet it could be a dessert

I bought this as part of a Meal Deal. The pie was so sweet I wasn't sure it was supposed to be the main savoury dish. There was a lot more mushroom than steak and the topping was very strange. The filo pastry needed longer in the oven at that low heat (gas 5) in order to be crispy which then of course dries out the filling too. If I'd paid full price for it I would have been even more annoyed!

Don’t buy unless you like sugary tasting meat pies

So sweet like eating a pudding. Just buy pie.

Great pastry, crisp tasty; nice gravy; I found 2 tiny chunks of meat in my half (yes, half) of this pie: Both tough, one fatty. Sell it as a gravy pie and I could not fault it. There is no steak, only a few bits of poor quality dog food in it.

I actually wouldn’t even give it 1 star!! It is the worst thing I have ever eaten! The meat was fatty and disgusting what there was of it, the pastry was average and the flavours were horrible. The pie was on baking paper for ease of removing pie. Did not work at all - it just collapses so looked as disgusting as it tasted. I have probably had most of the meal deal main courses which are usually very good. Will never order this again. I’m not one for leaving bad reviews but this truly deserves it 😩

A rim of filo pastry around the edge, does not a pie make.

It was the wierdest lasagne Ive ever had! I had to check what I ordered on the box after eating this as I expected Steak and Ale Pie and got a funny lasagne in filo pastry concoction! Steak and Ale is my husband's favourite meal and he said only a few words about it: 'Please don't order this again'......