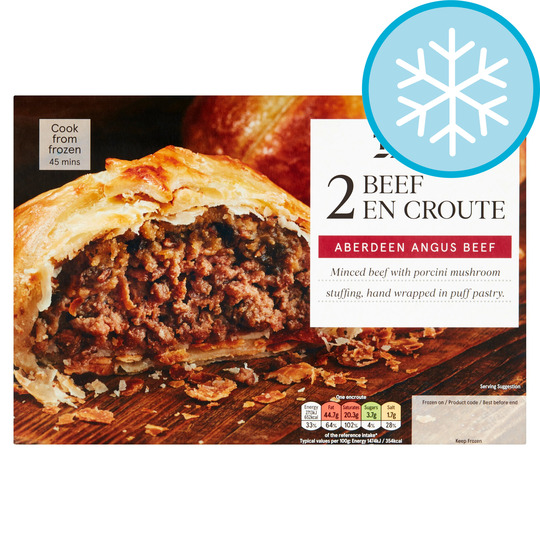 Instructions: For best results cook from frozen. 220°C/Fan 200°C/Gas 7 40 mins Place product directly on a cold greased baking tray. Brush the pastry with a little milk or beaten egg. Cook in the centre of a pre-heated oven for 40 minutes. For best results leave to rest for 5 minutes before serving.

Caution: Although every care has been taken to remove bones, some may remain.Caution: This product contains raw meat..

Awfull, disgusting threw it away and it spoiled my appetite tesco should be ashamed of making this

This is a cheap burger in pastry. Good job im grateful for any food.

Don’t normally write reviews but have to say these are awful. Flavour awful and the baking tray was swimming in fat when I took them out of the oven.

Awful... had to throw away ...during cooking time I had to replace them onto a different baking tray ..as they were swimming in grease ...I gave up I the end and binned them

Absolutely awful!. A greasy tasteless mush in pastry. Ended up in the bin.

One star is one to many ...... Grease, Grease and more Grease. The bottom of the oven dish they were cooked in, was floating in grease. The pastry was saturated in grease, to the extent it never flaked up, and that was after adding 15 mins to their recommended cooking time. The filling was tasteless. Far better to buy good hamburgers and some frozen flaky pastry and make your own .........

Very disappointed. Cooked as per instruction to accompany roast potatoes &!fresh vegetables. The pastry looked anaemic despite an extra 10 mins in the oven, it was also soggy & the parcel fell apart when trying to transfer to a plate. It looked more like a piece of soggy bread than puff pastry! The minced beef is tasteless & had no real depth of any type of flavour & the Porcini Mushroom Stuffing I defy to be there at all! Highly disappointed & would advise against buying

All i can say is these things are exactly what i have been looking for delicious meaty parcels of goodness, they are packed with flavour, filling, the pastry is puffy and light, i can only think the humans reviewing these have either had there taste buds removed, or are animal activists in disguise. This is the kind of thing you place on a mans plate at the end of a hard days work and he will thank you over and over again. The price is on the dearer side but for me these are treat not something you would buy for a larger family as the cost would be too much. 10/10 and so much choice, you can have with chips, potatoes, a roast dinner, a snack, salad, etc. Reviewed by a real man who likes food. Think i will go leave a review on a cucumber to teach these salad muncher's a lesson.

If I could I wouldn't have given it a star, but you can't do the review with out it. It was awful, with the reviews it's getting take it out the freezer or use proper steak and put up the price! People will buy it then!