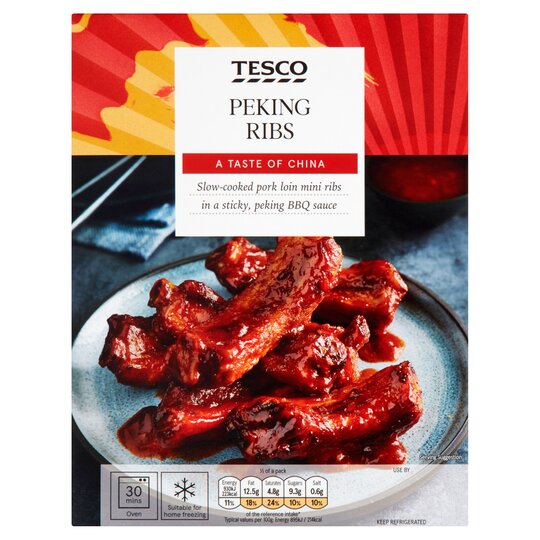 Suitable for home freezing. Ideally freeze as soon as possible after purchase but always by 'use by' date shown. Defrost thoroughly for a minimum of 12 hours in the refrigerator. Follow the preparation guidelines above. Once defrosted, do not refreeze. Not suitable for cooking from frozen. Keep refrigerated.

Instructions: Remove outer packaging. Decant contents of the pouch into the foil tray provided and cover with foil. Place in the centre of a pre-heated oven. Oven 200°C / Gas 6 / Fan 180°C Chilled 25 mins Remove foil and heat Chilled 5 minutes. Allow to stand for 1 minute before serving.

Made using British and EU pork

Caution: Take care when uncovering foil tray as product will be hot and steam may escape.Check food is piping hot throughout before serving.Caution: This product will contain bones.

Just bones with a lurid coloured sauce no meat Was

Just bones with a lurid coloured sauce no meat Waste of money and nothing like the picture on the box!

would never buy these again, waste of money.

Where is the meat, a lot of money for 5 bones, complete waste of money and would without any doubt NOT BUY AGAIN, do not be fooled by the picture, that is not what is inside the packet, WELL OVER PRICED FOR WHAT YOU GET.

There is plenty of tasty sauce. The packet claims to hold two portions, but this is wildly optimistic. Do not be mislead by the picture on the packet which exaggerates the contents - this product contains very little meat indeed. I regret buying this and will not do so again.

Only five very small ribs with very little meat on them, but tasty enough. Just enough for one person. I would not purchase them again as they are far too expensive for what you actually get.

These are ok but not very tasty and there are only 4 small ribs , the box shows more

Barely a single portion! Not worth the price.

Taste was alright but the weight of the product was mostly the sauce - there were only 5 measly half-size ribs in the pack. Couple of bites of meat on each, barely enough for one person, never mind the two that the package said. Not impressed.

to be fair there was only 4, very nice, BUT a few

to be fair there was only 4, very nice, BUT a few weeks ago I bought Tesco pork ribs. Froze them. Today I cooked them with Heinze BBQ sauce, Excellent we got eight ribs with no bones. So tender.

Tasty but barely any meat on the ribs

Really tasty. Meat fell off the bone and had a lovely flavour but be aware there are just 5 small ribs with barely any meat on them. You would need at least 2 packets per person and even then would probably still feel hard done by. Honestly, just cannot believe how little meat there was on the ribs. Very poor value for money.

I would give these 0 stars if it was possible. Thought my husband was joking when he told me how many ribs there were in this pack - 5. That's over 50p per rib! What a joke. Will never bother with these again. The sauce was sweet and had little flavour. Tesco - sort it out, this was daylight robbery for what is a cheap product to produce.