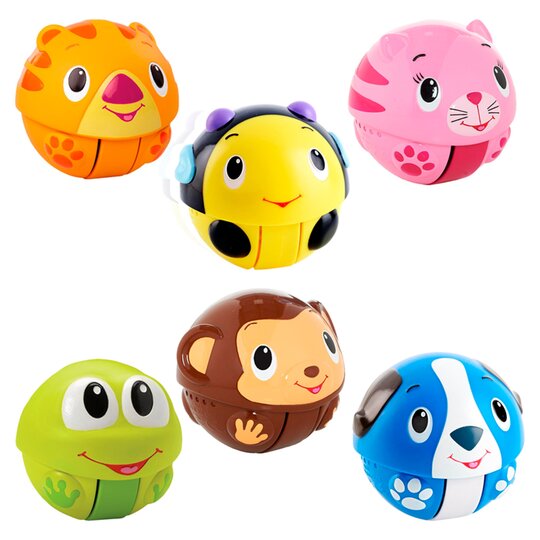 My son loves his blue dog and brown monkey. He plays with them nonstop. It was awesome that you can turn them on and off with the nub on the side so you don’t waste the battery. Once battery goes out I wouldn’t mind buying more.

How can I replace the battery. My son loves this product and I've been searching for weeks on how to replace the battery. It would be a waste to the environment and money if the battery can't be replaced. I hope the company really didn't make a product that was soo wasteful [This review was collected as part of a promotion.]

Bought this toy (the pink cat)and it doesn’t work and you can’t even replace the battery. I pulled the tab out when I got home so I know the battery didn’t just get used up at the store. Very disappointing to waste money on something that I can’t take back. Should have the information on the outside of the package so you know if it doesn’t work in the store don’t buy it!!!!!!!!!!!!

I bought this for my grandson and it didn’t work at all. Dead battery! And you can’t replace it. What a dud. Don’t waste your money.

From reading everything online you can't change the battery. Why even make it?? I got it for my daughter she played with it until the battery died. Now she won't have anything to do with it. If I knew it didn't have a battery you could replace I would have left it on the shelf and bought another toy.

Got the monkey one for our son. Battery did not even last 2 weeks. Can't replace it. This is the only toy I've ever bought that can't have a battery replaced. Price is too high for a "disposable" toy.

I bought the tiger and frog balls for my twin boys. It made them giggle for sure but stopped working after a week or so. Tried to figure out how to replace the batteries but can't seem to open them and packaging didn't have any indication. After googling it, I realized they aren't replaceable. Disappointing given the pricing and probably wouldn't have bought them had I known.

Who designs childrens toys with irreplaceable batteries, honestly my kid loves it but we have to replace it whenever the battery runs out, fix your product or provide a replacement guide that doesnt break the toy.

I just bought this product and specifically found one with the tab still in. Took it home opened it and the battery is dead. We didn't even get to use it! Worst toy purchase yet and I was so looking forward to letting my little one play with it.

Love this toy, hate the battery!

My son loved this giggling ball while it made noise, now the battery is dead after a few months of use. From what I'm finding on-line the battery is not replaceable, which is a major fail.