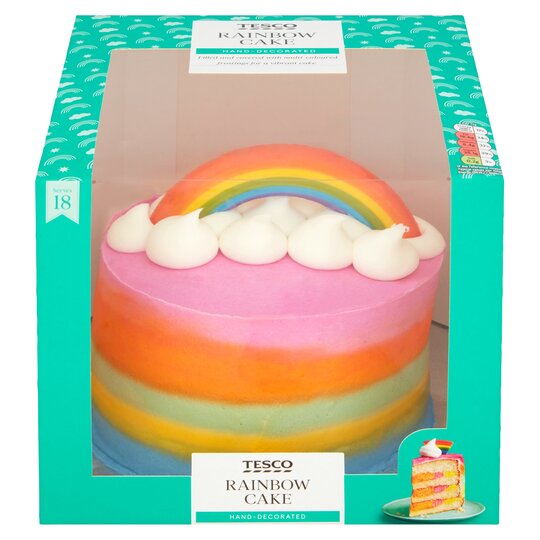 Way too much icing and way too sweet.

Looks good. Too much icing not enough sponge. So sugary even the kids didn't like it.

Just sugar and fat with a rainbow on top

Picked this cake because of the rainbow design for my daughter’s birthday. She hardly touched it. We all found it sickly sweet. The comments that mention a chemical taste to the icing are correct as well and you just feel ill after having any. Worst cake I have ever bought. It’s just sugar (39%) and fat.

I wish I had read the reviews before buying this cake, I like sweet things but this was sickly sweet and had a bit of a chemical taste to the frosting. My birthday guests had a small slice each, some didn't finish. Unfortunately it tasted so bad that the rest went in the bin. Very disappointing.

Very disappointing! There was way too much frosting / buttercream which tasted very artificial. There were 6 of us who had a slice of cake and none ate it! Looks good, the sponge is fine, but the flavour of the frosting ruined the whole thing...

I chose this cake for my daughter's birthday because she dislikes fondant icing. This cake looked quite nice but was so sickly sweet that even the children didn't eat much. It was quite dry inside and really could have used some nice buttercream.

Looks lovely but was so sweet and sickly that most people didn’t eat it and it went in the bin.

I bought the cake to celebrate my son finishing ex

I bought the cake to celebrate my son finishing exams. The appearance of the cake is good and the quality of the sponge was ok, but the icing tastes like whipped sugary lard, and is so overpowering (not only does it cover the cake, it also separates the layers), that for the first time ever, most of the cake has gone uneaten - in a household of teens and adults. I would not recommend this cake at all. If Tesco wishes to improve the cake in the future, I would recommend using half the amount of icing and incorporating butter cream and some tangy jam to break up the sweetness.

So sweet it's inedible

I bought this cake for my stepson's 11th birthday. He picked it himself. Horrible cake. It is the sweetest cake I have ever come across in my life - the cake itself is so sweet it's difficult to tell where the frosting ends and the cake begins. It's so sweet that it is almost inedible. I appreciate that it's a cake and therefore meant to be sweet but this takes you so far over the sweet line it is unbelievable.

Nice idea, but a total fail

Bought yesterday for my daughters birthday party- she chose it herself because she loved the rainbow design! But what a disappointment the cake was, there was SO MUCH frosting on the outside of the cake, it’s looked like it was ‘melting’ after only having for a couple of hours at home. And because there was so much frosting not only on the outside, but on the layers on the inside, it was just ridiculously sweet (and I love a sweet cake). We somehow managed to serve the cake (collapsing as we sliced) to the kids, but binned the rest as it was just a big pile of rainbow mess :(