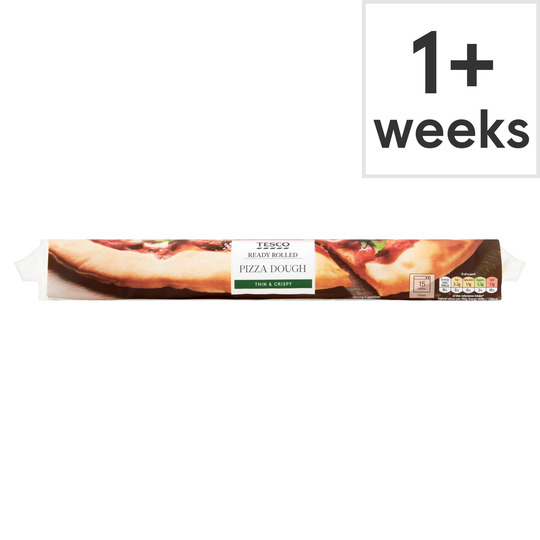 Not suitable for home freezing. Keep refrigerated. Once opened, use immediately.

Oven cook
Instructions: Remove all packaging except baking paper.
220°C/Fan 200°C/Gas 7 15 mins.
Unroll the pizza dough with the baking sheet provided and place onto a baking tray. Prick the pizza base with a fork before topping. Add your favourite toppings and place on the middle shelf of a pre-heated oven for 15 minutes or to stated time in your recipe.
Important
Not suitable for microwave cooking.
All appliances vary, these are guidelines only.
Check food is piping hot throughout before serving.

Produced in the EU

Awful, no other word to describe.

Total waste of money, time and effort. Cooked as per instructions. Result was a raw uncooked base, tried it for longer in the oven, still raw, doughy and in-edible. Do not buy this product if you like pizza!

Really disappointed in this product. The first time I bought it it was perfect, exactly as expected. The last two times I have purchased it has come in different paper (definitely not greaseproof as it says on the box) and has been impossible to unroll due to being so stuck to the paper it is in. The most recent one I spent a long time picking tiny pieces of the paper out of the dough after it all tore, and then had to ball up and re-roll the dough before I could use it.

Raw, sweet smelling and weird tasting dough. Would never buy again, I swear they used to be nicer. Put me right off pizza.

I like this dough, little high in calories but I find it cooks well.

Does not cook stays Raw ?

These bases used to be great.Not sure what has gone wrong with them now ,they just do not cook.The base just stays raw?.Brought two bases both the same ,and both did not cook.Waste of time money and all the topping that went on them as well.Shame as they were good .Would never buy again.

It was chewy and thin no rise.

The dough was dry

The dough was dry

Works well and cooks properly, could be a little larger.

Wasn't round, wasn't anywhere near as big as expected (literally half the size), smelled sweet when cooking and even though I cooked it 30 degrees higher and 15 minutes longer than stated it was still doughy when I took it out of the oven. Even the dog turned it's nose up at the final product.