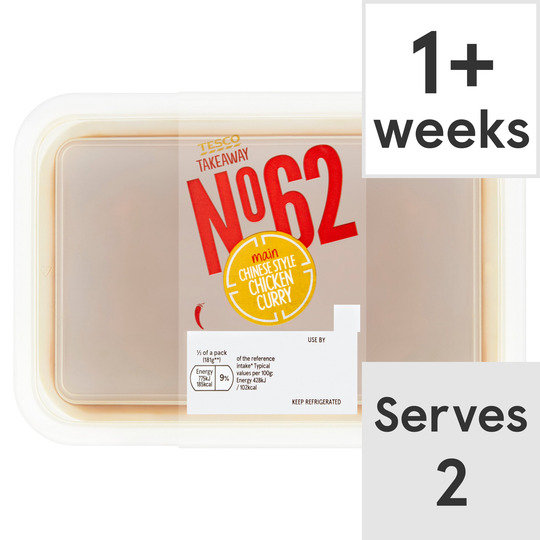 Suitable for home freezing. Ideally freeze as soon as possible after purchase but always by 'use by' date shown. Once defrosted use on the same day and do not refreeze. Follow the preparation guidelines above. Defrost thoroughly for a minimum of 12 hours in the fridge. Keep refrigerated.

Instructions: 190°C / Fan 170°C / Gas 5 25 mins Decant into an ovenproof dish and cover. Place on a baking tray in the centre of a pre-heated oven. Leave to stand for 2 minutes after heating. Stir well before serving. Not suitable for heating from frozen.

Tender with a nice sauce.

I enjoyed this. The chicken was tender and the sauce was nice. May well get again.

I LOVED THIS! Loads of garlic amd saice, Loads of flavour. Now for the bad bit. The reason I gave 4 starrs and not 5 was that the chicken had been added after it had been precooked and some bits were really hard and tasted stale. My recommendation would be to either use quorn or pulses and recommend it as served with chapatti and just leave the hard bits out. Also charge £2.00 - £2.50 as the normal price.

Shouldn't be allowed to sell this.

I was pining for a Chinese takeaway, not having had one for a year, when I noticed this. Seriously wish I hadn't seen it !! Had duck spring rolls to start and they were Okish, but the chicken curry was absolutely revolting. Would recommend to everybody to avoid. The hunt goes on for a good Chinese near Brechin !!

Not a lot of chicken

The flavour was good, however, It was mainly sauce with not much meat, I had 6 pieces of chicken in the whole container. Definitely not enough for one person let alone two. Will not be buying this again.

Watery and Bland, wouldn’t have been enough chicken had I eaten it!

Too sweet and not much taste. Very watery.

Bought as an alternative to going to the Chinese takeaway, wish we’d have gone to the takeaway. How do people eat this bland garbage, call this Chinese food.....I seriously have no words for this utter waste of money. What’s the phrase, not worth the calories.

4 tiny pieces of chicken!!! Ended up cooking mushroom and peas to bulk it out!

Not enough chicken in it and sauce to thin.

Not enough chicken in it and sauce to thin.

Very nice chicken curry but not much chicken!

Very nice chicken curry but not much chicken!