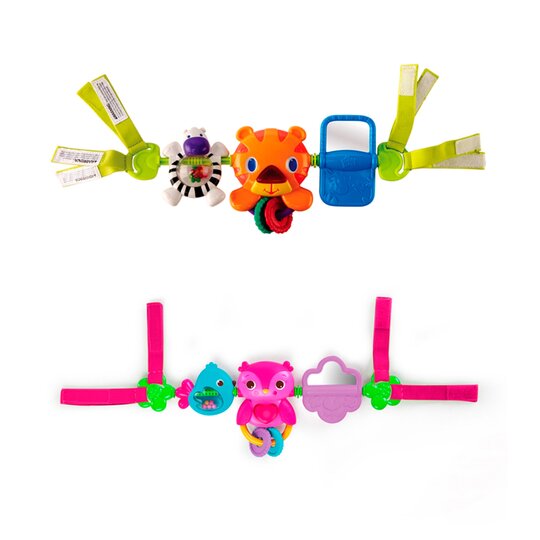 My baby loves this toy

My parents bought this toy for our son when he was 2 months old. He really took to it. He started out by kicking it and then later grabbing it. We do not use it on his car seat but had connected it to a basket in his playroom and when he could sit in his high chair we moved it there. The songs are cute and not annoying. The animals are cute and spin well on the bar. Although the songs are cute and volume is not too loud I would prefer all toys to come with on/off and volume control options that way you can conserve the battery and if it accidentally gets tapped it doesn't go off during naps or randomly and scare you.

No music after a month

Like many others, replaced batteries and zero sound/music; only light flashes. I bought this item for the music and had I known this would happen I wouldn't have spent the 13$ on it

Bought this for my baby who needed entertaining in the car. She loves it.

Well made pram toy. Easy to fit to pram or pushchair. Would recommend

My 3mths old boy enjoys playing with it! :) will recommend to friends

After several friends had this came as a great recommendation! Ordered via click and collect and was available to collect the next day !!

Was great... when it worked

I bought this for my son when he was a baby and he loved it. It always kept him entertained! Eventually he grew out of ithe and I put it away for awhile. Well now I'm expecting another child in less than a month and pulled the toy out to replace the batteries. The screw for the battery cover just kept spinning like it's stuck or something! I tried taking out the other 4 screws but tried he cover will not come off. What good is a toy that makes sounds if you can't replace the batteries?

I bought this for my 2month old and he absolutely loves it. Lights up and is very colourful so grabs his attention. Great that u can move it up and down depending if u want clear view of child or down low for them to reach out and play with. Highly recommend

My 3 month old is entertained by this toy bar and it easily attaches to the car seat, pram, and her bouncer with the velcro straps. The music on it could do with playing for longer, as she is unable to press the button herself, so I keep having to press the button. It is also a shame that it cannot be used whilst travelling in the car, as I would think this is one of the main reasons people would want to use it.

Bought this for my grandson. He loves the lights and sounds. They keep him entertained and happy and allow mum to get on other stuff without baby fussing.