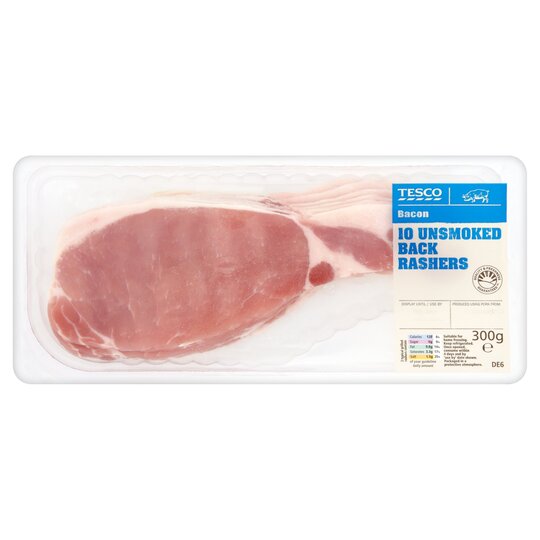 of the reference intake*
Typical values per 100g: Energy 449kJ

Suitable for home freezing. Ideally freeze as soon as possible after purchase but always by 'use by' date shown. Defrost thoroughly for a minimum of 8 hours in a refrigerator. Once defrosted use on the same day and do not refreeze. Follow the preparation guidelines above. Not suitable for cooking from frozen. Keep refrigerated. Once opened, consume within 3 days and by ‘use by’ date shown.

Shallow Fry
Instructions: Heat 1 tsp of oil in a frying pan. Add the bacon and cook over a medium heat, turning occasionally.

Very disappointed as mostly fat with hardly any ba

Lots of Fat and a little bacon, disappointed

Tesco delivered bacon which was full of fat and very little bacon. Discussed I can not cook this

Ridiculously thinly cut (wafer thin bacon) and full of water, so much so that once you've cooked it there's practically nothing left. Definitely won't be buying again

They taste good, but the only problem is they are extremely thin which forces them to curl up even if you cut them to stop that. A bit disappointing.

a tribute to industrial processing that bacon can be sliced so thin but almost impossible to pull apart to cook and as an added bonus, you can read a newspaper through it. shrivells up to nothing when cooked. avoid

mostly fatty packs have been given in my orders

several puchases lately have been very fatty only like lean

These are usually alright but the last pack was so thin, it was impossible to part the slices ad it just ripped up

It would have probably tasted nice had they actually delivered it. Sadly it was missing although we had paid for it!!!

Slices too thin. Make it 8 slices and you will get a rasher instead of transparent wafer this piece of meat.