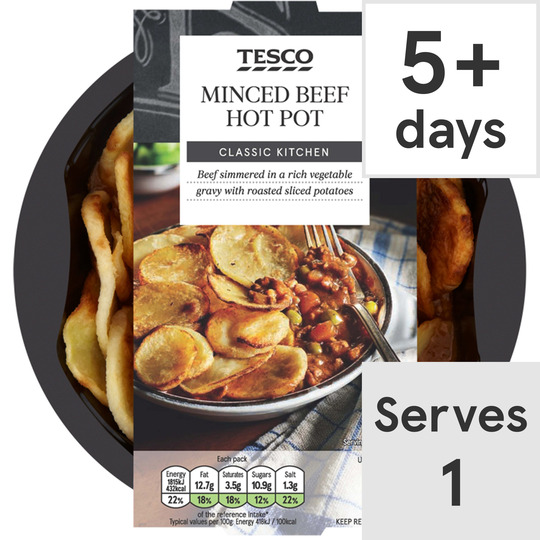 Produced in the U.K., using beef from the U.K.

Almost completely comprising potato slices, with a thin layer of meat and gravy at the bottom, which became overcooked during the oven heating process and stuck to the bottom. So, not great value.

Very nice hearty meal ....could do with having a bit more salt in it ...so I add salt to it before I cook it

Tasty but very small amount of meat - had a job finding it under all the potato slices.

Quite a substantial dish and not too salty. Fine microwaved, although I usually brown it in the oven afterwards.

Just wanted a nice quick hot meal but it was taste

Just wanted a nice quick hot meal but it was tasteless. it looked good but both mince and in particular the sliced potatoes had no flavour. I tried adding salt but even then no good. Put it in the bin. Shame because I love mince and this could have been much better.

Definitely recommend this product . Totally enjoyed it very much . Definitely buy it again.

My husband said it tasted like dog food and that the potato slices were still raw. When I tried it I noticed an incredibly strong taste of balsamic vinegar and the potato slices were a bit too al dente. I decided I would eat it next day for lunch rather than let it go to waste. Surprisingly next day when I reheated it the balsamic taste had gone, I can only assume that heating it from frozen does something that enhances the balsamic vinegar flavour or prevents it from mixing in with the rest of the ingredients that the taste becomes dominant. The filling wasn't as bad as what my husband said it was, however the potato topping was still a bit too al dente despite having now been reheated twice. I'd be ok having this myself since it's very low on all the bad nutrients and you do get a pretty good sized portion, but I am not sure what to do about that potato topping without overcooking the rest of the meal.