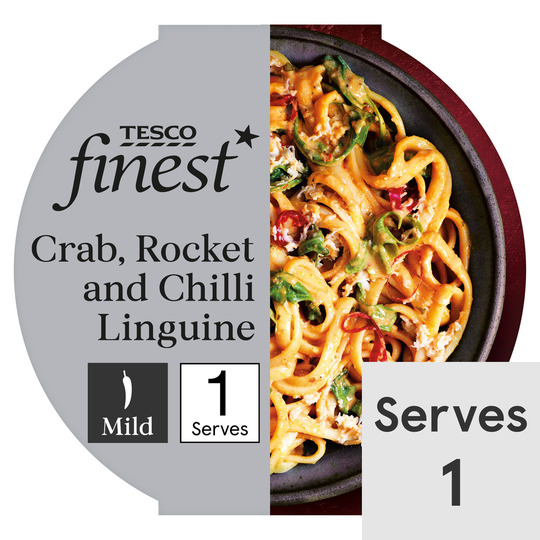 Instructions: Not suitable for oven heating

Instructions: Not suitable for oven heating

Made using crab caught in the U.K.

Definitely not for me

The linguine was okay but the sauce with crab was mushy and didn’t like the flavour, couldn’t eat it and won’t buy again.

Just OK. Crab linguine is my favourite meal. I wasn't expecting it to be the same as fresh white crab linguine from a seaside restaurant, but this was just not that good. Perfectly edible but not good. Not sure if it should be called 'finest'.

Tasty enough but only contained brown crab meat which really ruined the texture.

The new recipe is revolting. Used to be delicious - bring back the old recipe. Can see many others feel the same. DO NOT BUY - the current recipe is a waste of money.

This used to be my favourite but not any more, they have changed the recipe. It now has a creamy sauce and it's not nice. So disappointed, please go back to the original recipe!

Plenty of nice, tasty crabby sauce, but not enough linguine, which made it a small portion which left me hungry - stupid when there is plenty of sauce and pasta is so cheap. Serve with plenty of black pepper, parmesan, a squeeze of lemon - and more linguine!!

I wouldn't normally comment but this really was th

I wouldn't normally comment but this really was the most disgusting ready meal that I have ever tasted. It was so runny that I couldn't even describe it as soup and tasted disgusting. It went straight in the bin and ended up with a sandwich instead.

Tasteless. Having lived in Spain I've tried all ma

Tasteless. Having lived in Spain I've tried all manner of paella and without doubt this is the worst. It looks the part but fails to deliver.

NOT fine dining for one.

Bought this dish as I was having an evening on my own and didn't want to cook. It was awful! Once heated, the sauce is the consistency of milk. I had to pour more than half it down the drain after eating. Reasonable portion of pasta with three tiny wilted pieces of rocket and a few unidentified processed salmon coloured pieces that I presumed were crab as they certainly didn't taste like it. The chilli was ok. It would have been nice to have the rocket in a separate packet to mix in after heating. I didn't enjoy this at all and I definitely won't be buying it again.